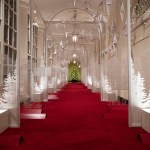 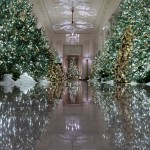 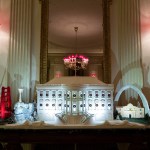 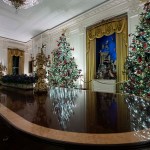 Christmas came to the Trump White House one last visit before the current residents vacate the 1600 Penn residence. First Lady Melania is being dragged for using what some say are ‘funeral urns’ as decor.

The holidays have come to Washington D.C. and for one last time, Melania Trump decorated the White House before President Elect Joe Biden and future First Lady Dr. Jill Biden move in. This year’s accoutrement definitely displayed Melania’s flair and modern edge as she celebrated “America the Beautiful, but it also seemed mournful she included foliage that seemed to be coming out of large urns down a White House hallway. They can be seen at the :37 second mark in the below video:

During this special time of the year, I am delighted to share “America the Beautiful” and pay tribute to the majesty of our great Nation. Together, we celebrate this land we are all proud to call home. #WHChristmas pic.twitter.com/fdZmB3rdXL

“Who gives a f— about Christmas stuff and decoration? But I need to do it, right?” Even the urns are ugly. pic.twitter.com/Uom7p52E5L

Some folks on Twitter mocked Melania for her “funeral home” theme with the urns. User @TessaLightsItUp tweeted, “Looks like Melania is waking an aisle of black funeral urns. Appropriate I guess,” with the Trumps moving out of the White House come January. User @FrecklesXX20 pointed out, “Black urns with funeral spray for Christmas in a raging pandemic.”

“‘America the Beautiful’ is a tribute to the majesty of our great Nation,” according to the First Lady’s office, and a celebration of “this land we are all proud to call home.” Upon entering the East Wing of the White House, guests are greeted by the traditional Gold Star Family tree, which honors those who lost loved ones in the Iraq War. The decorations also include urns holding foliage representing each state and territory, as well as holiday cards sent by the first families of the last 12 administrations.

The latest décor installments come just two months after the current FLOTUS went off in secret recordings with her former BFF Stephanie Winston Wolkoff. For Melania, getting the people’s house in the holiday spirit wasn’t exactly her top priority. “I’m working like a — my a– off at Christmas stuff, who gives a f— about Christmas stuff and decorations,” she said in the tapes. “But I need to do it, right? Correct?” Melania went on.

That wasn’t all the tapes revealed. “They say I’m complicit. I’m the same like him. I support him. I don’t say enough. I don’t do enough,” she complained in the recordings, referencing her husband, President Donald Trump. “I don’t give a f—. It’s true, it’s true. Honestly, it’s like — I’m doing the same stuff that I did before. They cannot stand him,” she said.

After the recordings became public, Melania’s Chief of Staff, Stephanie Grisham, issued the following statement to HollywoodLife: “[Stephanie Winston Wolkoff’s] only intent was to secretly tape the First Lady in order to peddle herself and her salacious book. There is no way to know if these recordings have been edited and it’s clear the clips were hand-picked and presented with no context. The First Lady remains focused on her family and serving our country.”

Melania decorated the White House with the “spirit of America” in 2019. Her over-the-top decorations featured long carpets leading to a single Christmas tree, with hallways full of white stars suspended from the ceiling. The tree featured strings of white light and a slew of other green firs decorated just the same.

The current FLOTUS shared the official video to her Twitter account with the following message: “The Spirit Of America’ is shining in the White House. I am delighted to share this beautiful exhibit of patriotism for all to see, and excited for everyone to experience the beauty of the Christmas season.”