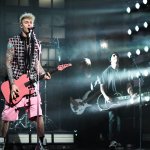 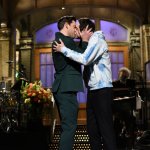 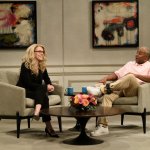 SNL‘s ‘Donald Trump‘ took after OJ Simpson as he bolted from the White House! In a hysterical news inspired sketch, host Dave Chappelle‘s ‘DC Morning’ host handled the breaking story that Trump was on the run in a white Bronco — just like OJ did in June 1994 following the murder of Nicole Brown Simpson. “The President has left the White House in a white Ford Bronco,” Dave’s host explained to the audience, as the screen went to footage that looked like OJ’s infamous chase.

“‘Don Jr.‘ is at the wheel,” he explained, noting that it was a “volatile” situation following Trump’s loss to President-elect Joe Biden: “He’s like Aquaman but instead of fish he can summon an entire parking lot of a Cracker Barrel!” While on the air, the anchors also got a live call from ‘Don Jr.’ to 911. “This is Don Jr. I have the President in the car,” he reasoned. “This is not about me — but you gotta tell the police to back off. Or my dad is going to start the campaign for 2024. He has the tweet written and ready to go,” he threatened.

Trump in a white Bronco 😂😂😂 pic.twitter.com/seQVWKrcEJ

Last week, Saturday Night Live used its cold open to remind viewers that anything can happen during a presidential election with a look back at the 2016 shock that Hillary Clinton lost. Jim’s Joe sat down with the audience for a spooky Halloween-themed story time, where he seemed fairly confidence that he seemed pretty confident about current polls. “There’s another holiday right around the corner — election day! But don’t worry, they say I’m eight points ahead! With points like that, it can only go wrong once in a blue moon,” he declared, coincidentally noticing an extremely large blue moon outside of his window. Yikes!

While reading an — erm — interesting interpretation of Edgar Allen Poe‘s poem “The Raven,” Kate McKinnon‘s Hillary made an appearance. ”At my chamber door was someone still a little sore,” he Jim’s Joe read from his living room, which was decorated for Halloween (with items borrowed Melania‘s Christmas display, he noted). “I think she’s scared of four years more [of Trump],” he added, as Kate’s Hillary — clad in a blue suit with a raven on her shoulder — entered his living room. “We lost before,” she dramatically reminded Jim’s Joe of her own 2016 defeat, where she actually won the popular vote but lost due to the electoral college system.

In the real election, the race between Biden and Trump was tenser than ever as Americans patiently waited for mail-in votes to be counted. Donald Trump repeatedly claimed victory on uncounted states, while Joe Biden urged for every vote to be counted. Celebrities like Chris Evans and Tamar Braxton quickly reacted to Trump’s unfounded comments on Twitter. “Wow. Hey Republicans, are you listening to this come-to-life toilet spew complete lies about the integrity of our democratic process?” Chris tweeted, while Tamar wrote,” This man has a very casual relationship with the truth..pumpkin you at a REAL 213….. smh #TrumpMeltdown.”