If you call out Cardi B on social media, it’s very likely that she’ll respond. The Grammy-winning rapper, 28, who’s known for clapping back at her critics, shut down a fan on October 13, after he asked an inappropriate question about her breasts. When the fan boldly inquired why her “areolas” are “so big,” Cardi responded: “Cause I breastfed a baby for 3 months. Titties got bigger, so nipples got bigger.” Cardi welcomed her first child, a daughter named Kulture Kiari Cephus, on July 10, 2018. 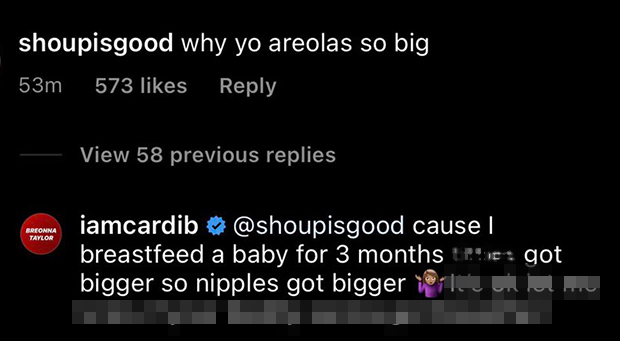 The viral clap back came after Cardi accidentally leaked a topless photo of herself to Instagram Stories on Tuesday — which was actually meant for her estranged husband, Offset. That same day, Cardi addressed the social media slip-up in an audio clip calling herself “so f–king stupid.”

She went on to explain that she went back and forth with Offset in an attempt to see if the photo had made its way to Instagram. And, it did. “By the time I turned my phone on and deleted that sh-t, everybody and their mom saw [her breasts]. “They were all over the internet,” Cardi admitted.

While Cardi was initially upset with herself over the leaked topless photo, she quickly recovered from the situation. “For like 30 minutes I was mad, but then again I’m like whatever,” she later said on social media, explaining, “Because when I started hosting I showed by boobs all the time because I was a stripper, like f–k it. Everybody saw my t-ts.”

Cardi even told her fans that, when it comes to her social media error, “It is what it is.” She reminded her millions of followers that “sh-t happens,” and even celebs aren’t immune to making mistakes of that nature.