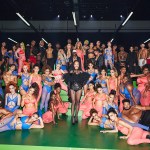 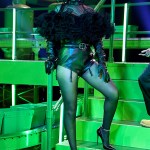 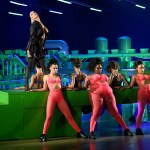 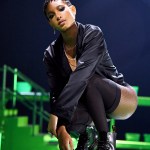 She may not be a model, but Demi Moore fit right in while appearing in Rihanna’s Savage x Fenty show. The 57-year-old absolutely slayed while rocking the sexy lingerie.

Demi Moore, 57, truly does not age! The actress was one of the models in Rihanna’s Savage x Fenty fashion show, which is streaming exclusively on Amazon Prime Video. During her segment, Demi looked incredible in a pair of fishnet stockings, paired with lacy black lingerie from the 2020 collection. Demi’s look was complete with chunky diamond necklaces, as well as dark eye makeup and bold red lipstick.

Other stars who appeared in the Savage x Fenty show were Lizzo, Normani Erika Jayne and Cara Delevingne. There were performances from Rosalia, Ella Mai, Miguel and Roddy Rich, while Travis Scott closed out the show from an apparent separate location. Of course, the queen, RiRi, herself also appeared several times during the show. She wore a number of different sexy outfits as she strutted across the runway.

Due to the coronavirus pandemic, the Savage x Fenty show wasn’t attended by lucky fans like in years’ past. In 2019, the show took place at the Barclays Center in Brooklyn, and everyone from Halsey to Gigi Hadid to Ashley Graham and more showed up to support Rihanna. RiRi first introduced the lingerie brand back in 2018, and isn’t showing signs of slowing down any time soon.

While the runway show may only take place once a year, there are often updates on social media. Rihanna often poses in Savage x Fenty promotional photos herself, while stars like Normani, Megan Thee Stallion and more are also ambassadors for the brand. Meanwhile, if you missed the Oct. 2 premiere of this year’s show, you can still stream it exclusively on Amazon Prime Video!