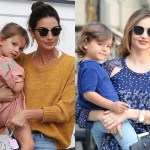 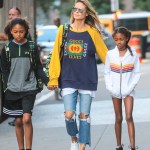 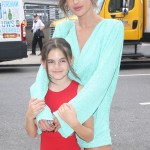 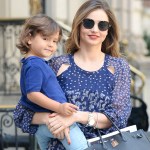 Elsa Hosk and boyfriend Tom Daly have a baby on the way! The model announced the good news on September 29, by revealing a nearly nude pregnancy photoshoot!

Elsa Hosk and her boyfriend Tom Daly are expecting their first child together! The 31-year-old Victoria’s Secret Angel announced the exciting news with a series of stunning photos (SEEN HERE) on her Instagram account on Tuesday. In her caption, Elsa revealed that she’s “half way” along in her pregnancy.

“Been keeping this angel in my belly a secret for a while… Feeling beyond excited and lucky to be having a baby and begin the next chapter of life with the man of my dreams!!!!,” Elsa wrote alongside the collection of photos and behind the scenes clips from her pregnancy photoshoot.

The Swedish supermodel posed nearly nude in front of a silver backdrop while she covered her breasts with her hands. She wore a nude-colored thong and held onto a white, fur jacket. Elsa credited photographer Sante D’Orazio as the creative mind behind her pregnancy photos. She even dubbed him as “the king of shooting nudes.”

Elsa shared the same photos and videos to her Instagram Stories, writing, “And if you don’t know, now you know,” on top of one photo. The model went on to admit that she hasn’t “gotten used to posing with a belly yet.”

Elsa and Tom, who tend to keep their personal lives private, have been dating since 2015. Tom, a Scandinavian businessman, is the co-founder and creative director of Running Vision, a company that sells sunglasses made for running. Before the COVID-19 pandemic, the couple spent most of their time traveling the world together. While Elsa is a regular on Tom’s Instagram, he’s rarely pictured on hers — however, that’s only because she chooses to share more photos of her modeling work than anything else. — Congratulations to Elsa and Tom!