Nicki Minaj has only been seen out in public one since her big pregnancy reveal on July 20, and that was at her home the following day. While she already had a fairly sizable bump in the gorgeous glam shots of her bare belly and while at her front gate, some fans now think she already had her baby. Nicki, 37, never revealed when her first child with husband Kenneth Petty is due, and now thanks to a loving comment from her mother Carol Maraj, The Barbz think the infant could have already arrived.

Carol called her daughter by her birth name Onika in the Sept. 16 Instagram post, and thanked photographer David LaChapelle for the gorgeous portrait he took of Nicki showing off her pregnant belly in a cut-out white gown inside a colorful sphere. “Is it too late to post a #WCW? Thank you @david_lachapelle for capturing my heart on the outside. Onika has always been so nurturing  caring, loving, bold, beautiful, God-fearing and selfless… motherhood already looks beautiful on you!” Carol wrote.
The last line sent Nicki’s fans into a frenzy, as Carol made it sound like Nicki is already a mom now. User @il_dude_kai commented, “She had the baby y’all im crineee,” while @nickiminajbarbiie asked, “How does it feel to be a grandmother?” along with red heart emojis and smiley faces. Fan @hewannapartywittbarbie wanted to know “did she have the baby already?” 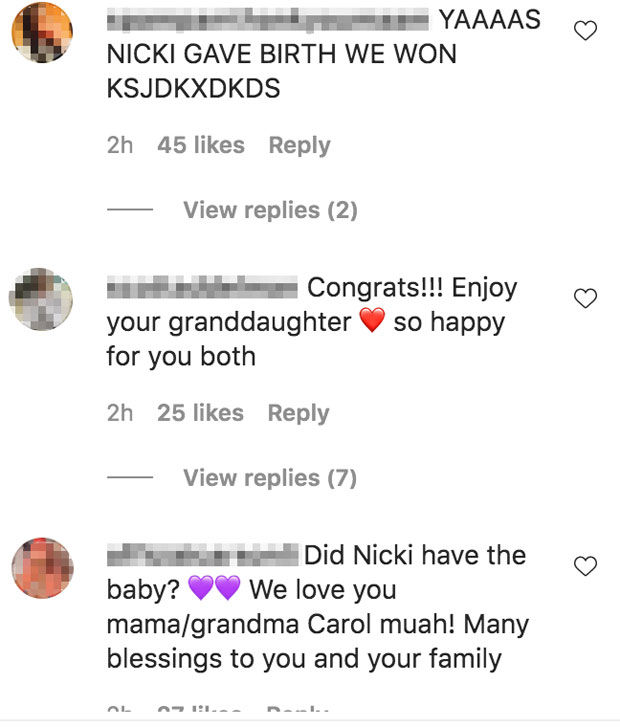 Other fans pointed out how Nicki has been mostly absent on social media since her baby news dropped. After the photos she posted on July 20, she shared a handful of posts featuring facial shots around July 30 to promote A$AP Ferg‘s single “Move Ya Hips,” which featured the “Anaconda” rapper.  User @astkingzstanding commented, “Hope she doing okay she been off social media lately I’m worried,” while @bitchnotff asked Carol, “Can you tell Nicki to come back please?” to the ‘gram.
Nicki appeared to be in her second trimester in the baby announcement photos, but it is unclear when those were taken. Since most of the U.S. went into quarantine in March, she could have had a baby bump growing for much longer than fans know. Nicki hinted at a pregnancy in May during an online fan Q & A, where she mentioned the food”cravings” she was having while in lockdown. A curious fan asked Nicki if she could “post a baby bump pic,” and surprisingly Barbs responded back, “Yea in a couple months. The world ain’t ready yet.” Sure enough, a few months later Nicki posted the bump photos!
Articles Trending Now