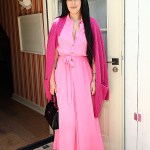 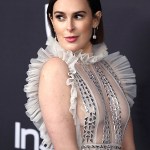 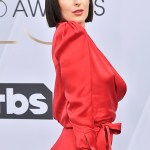 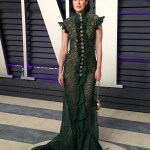 Rumer Willis is celebrating SKIMS first anniversary in style. The actress, 31, is the star of a sexy campaign for Kim Kardashian‘s shapewear brand, and she looks absolutely identical to the Keeping Up With The Kardashians star in every image. It’s seriously uncanny. The first image, which you can see below, shows Rumer standing on a velvet bed while surrounded by photos of Kim. She’s wearing a black bodysuit and has long, dark and wavy Cher hair — a Kim signature.

Happy Birthday @skims !!! Thank you to the team and the oh so lovely @kimkardashian for including me. You are a gem my dear

Rumer captioned it, “Happy Birthday @skims!!! Thank you to the team and the oh so lovely @kimkardashian for including me. You are a gem my dear.” The second image showed Rumer lounging on the same bed, striking the same pose as one of the Kim cutouts behind her. This time, she’s wearing a nude bra and high-waisted underwear set, layered over nude pantyhose. She captioned the photo, which shows an old fashioned rotary phone next to her, with a cryptic message: “Waiting by the phone like…. @skims.”

Her last, and maybe best SKIMS post is actually a video! This time Rumer’s calling someone on the rotary phone, still clad in her black bodysuit. It ends with a woman’s voice on the other line answering with, “hello?” Kim, maybe? Rumer’s incredible body is put on display in her SKIMS undies in a subsequent video. Now, she’s kneeling on a bed as the phone rings, rocking a pair of black high heels.

Rumer’s spot is part of a much larger campaign for the SKIMS first anniversary. Kim posted some images of herself repping her brand to celebrate, including one photo where she’s wearing shapewear in a room covered floor to ceilings in SKIMS items. She posted glam photos of SKIMS customers and supporters, too — and they’re all so gorgeous! More celebrities also joined in, including Kourtney Kardashian‘s BFF and TikTok star Addison Rae, Sports Illustrated Swimsuit Issue model Precious Lee, La La Anthony, model Yovanna Ventura, and Queen & Slim star Jodie Turner-Smith.