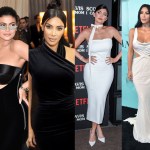 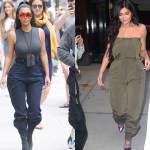 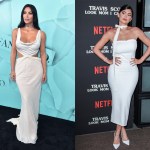 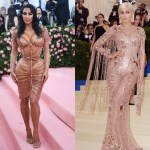 In the director-leaked music video for Kanye West and Tyga’s 2017 track ‘Feel Me,’ Kim Kardashian appears to give birth to Kylie at the end of the video! Check it out here!

Three years after the track released, director Eli Russell Linnetz finally shared with the world the music video for Kanye West and Tyga‘s track “Feel Me,” and it might have been worth the wait. The futuristic music video, which features monster trucks and two monster-sized Kardashians, debuts three years after it was filmed! Kanye’s wife, Kim Kardashian, and Tyga’s then-girlfriend, Kylie Jenner, make major appearances in the visual accompaniment to the song, and we had to do a double take to really know it was them.

In fact, by the end of the video it was hard to tell who was who, as it appeared that Kim gave birth to Kylie! At the 3:17 mark of the music video, two legs with high heels at the end of their feet flank the sides of the camera frame, as it appears one of the famous sisters is giving birth. Soon, Kylie walks right into frame — which fans could tell by her platinum blonde pixie ‘do and the outfit she rocks throughout the video. It was truly an image fans had to see to believe! But that wasn’t all from the roughly three-year-old video. Kylie first appears in the music video before her older sister, rocking a platinum blonde pixie cut and skimpy outfit featuring a white crop top and teeny-tiny shorts. Monster trucks swerve around a racetrack throughout the video, while Kylie towers over them. By the 1:40 mark of the music video, Kim finally enters the picture, with the lyrics signifying her arrival. “Kim K thick, you gotta feel me,” Tyga and Ye rap in the song. “Feel Me” is directed by Eli Russell Linnetz, who also collaborated with Kanye for his music video for “Fade” in 2016. He’s also worked with Shawn Mendes on the video for “Nervous” in 2018. Following the release of the track, the video was highly anticipated. Although it’s not clear why it’s seeing the light of day now, fans buzzed about it on Twitter, sharing the link to the video once Eli finally dropped it.

At the time of the song’s release, Kylie and Tyga were a hot young item. The two started dating in 2014 but split in 2017. The video was shot when Kylie would have been about 19 or 20 years old. Eli directed the music video roughly two years after Kim and Kanye welcomed their second child, a son, Saint West, who is now four years old.