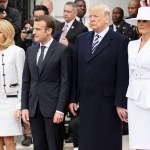 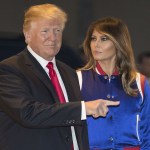 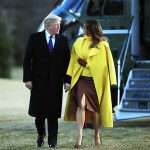 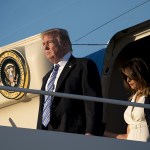 How frosty! Melania Trump did a major eyeroll after stepdaughter Ivanka Trump waltzed past her onstage at the RNC. Viewers can’t get enough of the first lady’s apparent shade.

Melania Trump and her stepdaughter Ivanka have never been close. But the 50-year-old first lady might have let it slip how she really feels about husband Donald Trump‘s precious pride and joy. During the Aug. 27 closing night of the Republican National Convention, the 38-year-old senior presidential adviser walked past Donald and Melania onstage in front of the presidential dais to stand on the opposite side of her father. While Melania gave her a wide smile initially, once the former clothing designer was out of her visual range the first lady’s face collapsed, her eyes grew large and she appeared to give a major eyeroll.

Did Melania just roll her eyes at Ivanka? @ProjectLincoln pic.twitter.com/EBFRheqOtD

Melania stood with her hands at her sides as Ivanka made her way to her dad’s right side and lovingly rubbed his arm. Donald has always made it known how overly fond he is of his eldest daughter — sometimes in a really creepy way — and perhaps Melania has had enough of it over the years. Either way, her face quickly sank from her initial smile at Ivanka to a look of Melania barely being able to hide her  annoyance.

I see that Melania and Ivanka are getting along juuuuust fine. pic.twitter.com/ktnmRBBG7Q

The interaction was not at all lost on viewers, who took to Twitter to call out the frosty reaction. User @Misstiblu wrote, “She goes from smiling to a look of I don’t know what in .001 seconds. What is that look? I can’t define it,” to which @A_helena responded, “controlled disdain & quiet loathing.” User @booksanescape exclaimed, “That hate filled look says everything!” as @NellieBlithe spoke the truth when she wrote, “We’re going to get some great gifs out of that,” referring to Melania’s shade throwing look.

Melania’s look of loathing comes the day after excerpts from a new book by her former confidant Stephanie Winston Wolkoff were released that claim Melania tried to block Ivanka from photos of her dad’s swearing in ceremony in Jan. 2017. In Melania and Me: The Rise and Fall of My Friendship with the First Lady, Wolkoff writes, “We were all exhausted and stressed out. Yes, Operation Block Ivanka was petty. Melania was in on this mission. But in our minds, Ivanka shouldn’t have made herself the center of attention in her father’s inauguration.”

The author also claims that Melania refers to Ivanka as “Princess,” in excerpts published by New York magazine. Wolkoff writes that there was even a turf war over the White House’s East Wing, which traditionally belongs to the sitting first lady. Wolkoff claims, “Ivanka was relentless and was determined to be the First Daughter Lady and to usurp office space out from under Melania; she wanted to be the only visible female Trump on the premises.” If Melania’s reaction to Ivanka tonight was any indication, there’s still bad blood between the two main women in Donald Trump’s life.