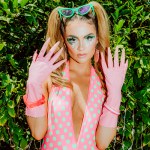 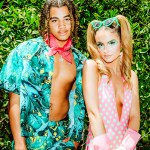 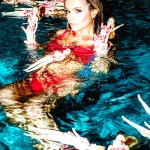 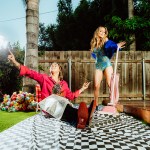 It takes a certain kind of talent to look flawless while totally drenched, and Chelsea Collins has IT. The singer shares an EXCLUSIVE look into the making of the video for her ‘Barbie’-inspired bop with rapper 24kGoldn.

One week after Chelsea Collins lived out her full Barbie fantasy in “Water Run Dry,” the singer pulled back the curtain to share an EXCLUSIVE behind-the-scenes peek into the making of her new video. The visual for her collab with 24kGoldn is 100% pure Mattel goodness, but as this new featurette shows, it took a lot of hard work to make this plastic dream a reality. With a crew in facemasks and practicing safe, social distancing when possible, this new vivid video came together – thanks a lot to the chemistry Chelsea shared with, as Goldn described himself, her “light-skinned Ken doll.” It’s hard not to believe that these two were (literally) made for each other when they go in for a kiss.

While filming “Water Run Dry,” the crew wore facemasks and practiced social distancing when possible. As it turns out, distance was a huge influence in the creation of Chelsea’s track. “I was in a long-distance relationship at 19,” she tells HollywoodLife, “and eventually, in long-distance — especially as a teenager — you start to grow apart because you realize you’re on different paths in life. The love for the person wasn’t lost, so I tried super hard to fix it and not let the passion run out, but it almost had felt like the universe had already determined it was over.”

Anyone who has ever been in a long-distance relationship knows that, at some moments, it feels like a poor substitute for the real thing. Chelsea wanted that “artificial” feeling is woven throughout the video, showing that behind her powerful voice – which can deliver an infectious, catchy hook that will be in your ears for days – lies a sharp mind with a clear artistic vision. “I wanted to incorporate my obsession with Barbie dolls and iconic movies like The Stepford Wives,” she tells HollywoodLife, cluing us into where she got that plastic, dead-eye stare she breaks out in the video. “It felt fitting because I do somewhat believe in the simulation, and I felt like my person was controlling me like a doll within this relationship! But the video itself was so fun, and everyone on set was so talented.”

There’s talent throughout “Water Run Dry.” From the airy, dream-like production, to Chelsea’s enchanting vocals, to 24kGoldn’s verses (just listen to them and try not to smile.) “He’s super charismatic and talented,” Chelsea said of 24KGoldn. “It’s also dope because we are both from the Bay area, and I love to see people from the same [San Francisco] killing it!”

Expect Chelsea to continue to kill it herself. Earlier in 2020, she released the Nat King Cole-inspired “Used To Be (L.O.V.E.),” adding her own flavor to the song made famous by Ms. Cole and Frank Sinatra. She paid homage to another influence later in the year by releasing “07 Britney.”

“Water Run Dry” is out now.