UPDATE (8/23/20 @ 7:40 p.m. EST): Lea Michelle and Zandy Reich have chosen a name for their son! The little boy is named Ever Leo, People magazine reported later this afternoon. How adorable!

Lea Michele and Zandy Reich are basking in baby bliss after the birth of their first child! “Everyone’s happy and healthy, and they’re extremely grateful,” a People insider dished on Sunday, August 23, after revealing the joyous news about her giving birth. “He’s been an easy baby so far,” the source added. The Emmy-nominated actress has remained mum about her baby so far on social media.

News that the Glee star, 33, was expecting first broke in April, though Lea didn’t confirm she was pregnant until early May. She took to Instagram to share a photo of her growing baby bump on May 2, with the caption, “So grateful.” Lea was pictured standing in her backyard as she cradled her belly in a blue dress. 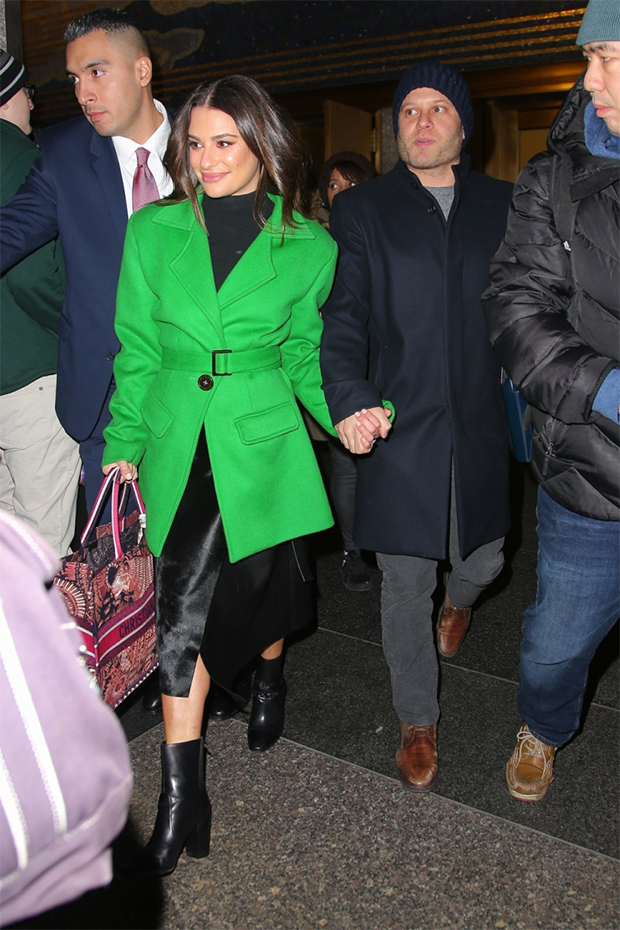 Lea Michele and Zandy Reich hold hands while out on a date night. (Photo credit: Backgrid)

Lea celebrated her first Mother’s Day while pregnant with her mother Edith. The actress shared a photo alongside her mom, as the pair looked down and smiled at Lea’s growing belly. A few days later, the singer shared another bump update with her 6 million Instagram followers. This time, she snapped a post shower mirror selfie that showed off her amazing figure in an adorable striped bikini.

This marks the first child for Lea and Zandy, 37, who proposed in April of 2018. She announced their engagement on Instagram, posting a photo of herself with her hand — which featured a massive radiant cut diamond ring — on her face. “Yes,” she wrote in the caption of her post, including a diamond-ring emoji, of course.

Getting some extra sleep while I can💛

The New York Times best-selling author and the president of AYR clothing company tied the knot in a stunning ceremony in Northern California in March of 2019. The couple first sparked romance rumors in 2017 and dated for two years before they said “I do.” Congratulations to Lea and Zandy on their new addition!