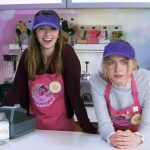 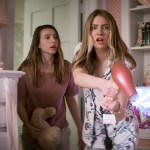 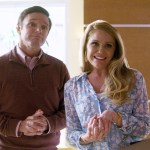 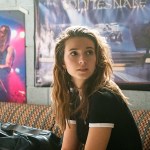 ‘Teenage Bounty Hunters’ is taking Netflix by storm. HL spoke with Anjelica Bette Fellini about all things Blair and Sterling, that epic finale twist, a potential season 2, and more.

Everyone wants twin-vision after watching Netflix’s newest series Teenage Bounty Hunters. Anjelica Bette Fellini and Maddie Phillips star as twins Blair and Sterling, who find themselves hunting down bad guys while also balancing the highs and lows of high school. HollywoodLife talked EXCLUSIVELY with Anjelica about the first season of the show, which is streaming now.

Anjelica was just as shocked as the rest of us when she learned that jaw-dropping finale twist, which will change everything for Blair and Sterling. She also revealed that she thinks Blair is ready to “focus on herself” after her breakup with Miles and why the twin twist will affect both girls’ “emotional growth.” Read our Q&A below.

What stood out about the role of Blair in Teenage Bounty Hunters?
Anjelica Bette Fellini: First of all, Jenji Kohan. That was a huge thing for me. I was a little floored when I got the audition. Second of all, Blair’s character breakdown said that she was her own sexual lab rat, and I just remember sitting in a cafe with my friend and was like, “Oh, this part was written for me.”

Would you say that you are a lot like Blair?
Anjelica Bette Fellini: It ebbs and flows. I think every character comes from a piece of yourself. One of my favorite quotes from Meryl Streep is how she talks about how she embodied her character in The Bridges of Madison County almost the same or like a year later after she did her role in Sophie’s Choice. They asked her how she portrayed these two women who were so polar opposites and the different accents — a Polish accent and then an Italian accent — she said, “Well, they’re part of me. I almost can’t take the character out of me. They are a part of me.” I think that when I read the character breakdown for Blair, as amusing as that breakdown was and as much as I could see a bit of myself in Blair, I could also see the differences. She’s extremely high energy, which I can be at times, but I can also be very quiet and organized. I think sometimes she’s a little bit of like exploding confetti, but it was such a joy to explore that part of myself when I’m able to portray her.

Sterling and Blair’s relationship is at the heart of this show. What was it like meeting Maddie Phillips for the first time and then forming that twin bond with each other?
Anjelica Bette Fellini: It was actually fantastic. We love to talk about it because we connected instantly without needing to talk about anything or really know each other. We joke around about how in the chemistry read where we met, we completely blacked out because we just didn’t know what we were doing, and we were making choices that were different than we had prepared. Especially Maddie because she had been doing chemistry reads all day. I was the last girl of the day, and we ended up stepping out and getting dinner together that night. She was like, “You and I together ended up doing things that I didn’t do all day.” We were improv-ing in the room and just making these outlandish choices that it seemed like we were a comedy duo that had been practicing improv comedy for years together. But we weren’t. We had literally just met. So it came very naturally to us.

The season finale ended with the massive twist that Blair and Sterling are not twins but cousins. What was your immediate reaction to that?
Anjelica Bette Fellini: Kathleen Jordan, our showrunner, had teased us this mystery forever, and the only person who knew it was Virginia [Williams]. So we were very anticipatory about the twist. When we got it, I think I just sort of sat with it. It was perfect. It’s phenomenal writing. When Maddie read it, she texted me and said, “Kathleen is a sick woman. Are we cousins?” That was funny, and I think we laughed and cried a little bit. I think it does sort of change the relationship between the girls. They think that they were in the womb at the same time, and it turns out they weren’t.

Did you have any inkling of what the twist might be beforehand? Is there anything that led you in the direction that they might not be sisters?
Anjelica Bette Fellini: No, I was at a complete loss. I had no idea.

How do you think that twist could impact their relationship in a potential season 2?
Anjelica Bette Fellini: It’s a fantastic question, and I’m just as eager to know as you are. I think the most fascinating thing about the twist to me as I portrayed Blair was that it made sense to me why the Wesleys were a little bit harder on Sterling, as far as academics and wanting her to be the perfect Christian girl and why they allowed Blair to have this life of her own. In episode 9, when we confront them about Dana being wanted for arson, Blair says, “Cut the crap.” Mom and Dad say, “Blair, don’t sass me.” And then Sterling repeats what Blair says and goes, “Yeah, cut the crap, Mom.” And they go, “Oh, Sterling!” They hold her to this impossible standard because of who her parents are, so I think that it’ll be very interesting to see where they take the personal lives of the girls just knowing this information. As I portrayed Blair, a part of how I portrayed the character was that her parents seemed to give more attention to Sterling, but now we have the answer to why that was, so I definitely think it will affect both of their emotional growth.

Blair thinking that her parents gave more attention to Sterling says a lot about sibling dynamics and perspective. It would seem like Sterling would take this news the hardest, but I feel like Blair might really take it really hard as well.
Anjelica Bette Fellini: I agree. Blair hates liars, which is why what happened with Miles is so detrimental to her. She wants the truth, the whole truth, and nothing but the truth. I do think it will be interesting to see how it affects her emotional well-being.

By the end of the season, where do you think Blair is at emotionally when it comes to love? Especially after what happened with Miles…
Anjelica Bette Fellini: I think she’s ready to focus on herself. I think that she would be open to finding another love, but her relationship with Miles taught her that you can’t ask somebody to be something that they’re not. I think that both Blair and Miles take turns with that in the relationship, that idea of finding somebody that you love and having them not really fit perfectly but just really wanting to make it fit and smushing that square peg in a round hole as much as you can. I think that they do have some compatibility and a lot of love between them, but I think in the end, it will be better for her to figure out what it is she wants from a partner, rather than somebody who is not exactly what she needs.

Is there anything you would want to explore with Blair in a potential second season?
Anjelica Bette Fellini: I’m open to whatever they want to give me and her. I am open to go down any path. I think it’ll be the most exciting to see how this changes the girls’ relationship and how it takes them through life.

You also have The French Dispatch coming up. What was it like joining the Wes Anderson universe?
Anjelica Bette Fellini: It was fantastic. To start it off, the audition process was amazing. He sort of picked my video out of a very long list of people. At the end of the audition process, I was like, no matter what happens, this is incredible because I was noticed. When I got it, I think a part of me just dropped dead. It was beyond the stratosphere of what I was even able to dream of when I was dreaming of becoming an actor. And then to get to the logistics of it, I traveled internationally for the first time. I had never been international before. I went to France to film this movie and, and then I was able to meet these legendary actors — Tilda Swinton, Elisabeth Moss, Bill Murray, Jeffrey Wright. I was just in a room filled with people that I did not feel like I belonged there, but they accepted me with open arms. Even Wes’ crew is very long-standing with him, and I was able to meet these people who had worked with Anjelica Huston, and I was asking them to regale me with stories of working with her because she’s one of my favorite actresses, and I just happen to share her name. It was just really an honor. Wes couldn’t have been more welcoming and amazing to work with. It was really a dream come true. I can’t think of any other words but a dream come true.