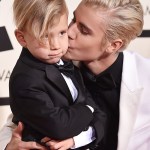 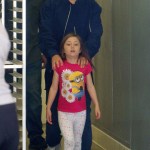 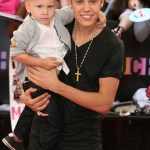 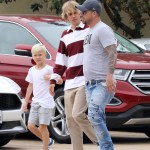 Bay Bieber is walking in her big half-brother’s footsteps — literally! The adorable two-year-old was featured in Justin Bieber‘s latest Instagram post on August 17, where she strut her stuff in some fly new kicks given to her by her big half-brother. Bay looked absolutely adorable in Justin’s snap, admiring her new shoes and sporting a Wu-Tang Clan T-shirt with black joggers.

Love you lil sis @baybieber glad u like your new shoes

Justin couldn’t help but gush about his little baby half-sister, writing the absolute sweetest caption. “Love you lil sis [Bay Bieber] glad u like your new shoes,” he wrote alongside the photo. Bay is the youngest child of Justin’s father, Jeremy Bieber, and stepmother, Chelsey Bieber. And the youngster looks like she’s already capitalizing on her burgeoning fame!

Bay has her own Instagram account, run by her mom and dad, and boasts over 400k followers. Right now, most of the two-year-old’s photos feature her in the cutest little outfits and bonding with her family members. One snap from May 15 featured Justin and Bay spending some quality time together! They each wore similar hats and Justin looked at his little sis with all of the love in the world. “Biggest brother,” the image was captioned, featuring a blue heart emoji!

Of course, being a doting big bro is absolutely nothing new for Justin. Family is incredibly important to the singer, and he has matured so much in order to make them his top priority. Even during the holidays, Justin and his beautiful wife, Hailey Baldwin, shared endearing photos from Justin’s family home — capturing sweet instances of affection between loved ones.

Not to mention, Justin orchestrated one of the best surprises for his 12-year-old sister Jazmyn. The “Yummy” singer brought together footage from some topnotch celebs, including Kendall Jenner, Ariana Grande, and more, with each wishing her a happy birthday! Now that is one devoted big bro! We cannot wait to see more moments that Justin shares of his siblings in the future.