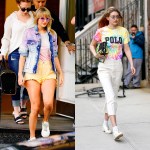 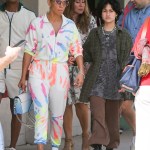 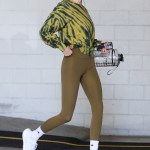 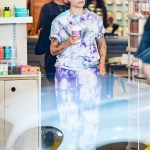 Bethenny Frankel took to Instagram to share some stunning snapshots of herself posing outside while wearing a flattering tie-dye bikini and sun hat and she looks half her age!

Bethenny Frankel, 49, is looking absolutely amazing in her latest summer pics! The reality star posted two new Instagram photos of herself showing off a white bikini with colorful pink and blue tie-dye patterns on Aug. 11 and it caught the eye of many of her followers. She also paired the look with a sun hat and sunglasses and kept her wavy brunette locks down as she smiled for the camera.

Bethenny’s fans couldn’t help but leave compliments on the pics shortly after she posted them. “Perfect body! You look so beautiful and happy!” one fan wrote while another gushed, “Where’d you get the suit? You look fabulous and happy! 😄”

Bethenny’s most recent pics remind us of other celebs who’ve flaunted flattering tie-dye looks in the past. Some of them include Jordyn Woods, 22, Hailey Baldwin, 23, and Khloe Kardashian, 36. Jordyn took to Instagram to post pics of her tie-dye look on Apr. 28, which can be seen below. It consisted of a white crop top with pink, blue, orange, and yellow splatters all over it and black leggings. She posed for the snapshots while standing in the gym.

had to get it in! How’s my @frst.place family💕 I can’t believe how fast and strong the community is growing and also the transformations I’m seeing from some of you so quickly is amazing🤩😍 let’s get itttt! Happy Tuesday 😘

Hailey represented her husband Justin Bieber‘s clothing line, Drew, when she modeled a tie-dye jogging suit from the brand on July 4. She shared two pics, which you can see below, that showed her taking selfies in the mirror while wearing the stylish outfit, which consisted of a pink, yellow, green, and blue tie-dye patterned crop top and matching pants. She also let her pink bikini bottoms peek through in both photos and showed off her pink strapless bikini top in one while also wearing a bucket hat.

On July 27, Khloe followed suit by posting her own tie-dye pics. The Keeping Up with the Kardashians star shared two close-up snapshots that showed her puckering up for the camera while wearing a green, blue, pink, and yellow long-sleeved tie-dye top, which can be seen below. She captioned the pics with just one emoji that showed a pair of red lips and we think it was the perfect representation for the post!

Check out the gallery above to see what other celebs joined Bethenny, Jordyn, Hailey, and Khloe in publicly rocking tie-dye looks that fit them amazingly! You won’t be disappointed!