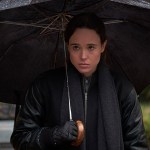 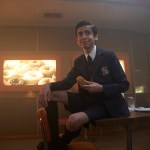 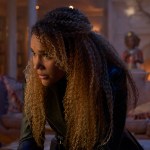 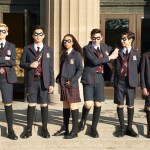 Season 2 of ‘The Umbrella Academy’ was one dramatic and groovy roller coaster. HL spoke with showrunner Steve Blackman about saving the best twist for last, what season 3 would bring, and more.

The Umbrella Academy took it way back in season 2 to 1963. Even though most of the Hargreeves siblings were separated for most of the season, the family dysfunction was still at the center of the series. Each of the siblings went on their own journeys, and they all collided again to help save the world and prevent the world’s destruction.

HollywoodLife talked EXCLUSIVELY with showrunner Steve Blackman about what those final seconds mean for the future of the series. Ben’s alive (sort of) and now the Umbrella Academy has to deal with the Sparrow Academy. He also revealed that Vanya and Allison’s journeys in season 3 will be “painful” to an extent. Plus, want to know how that incredible Backstreet Boys musical moment happened? Steve is answering everything.

Let’s just start with the ending. You introduce the Sparrow Academy at the very end. What can you say about where season 3 would pick up?
Steve Blackman: I can’t say much. We haven’t gotten a season 3 pickup, but I can tell you what season 3 will be because I’ve already planned it out beginning, middle, and end. I can tell you their lives are going to get very complicated. Hargreeves says this is not your home anymore. It belongs to the Sparrow Academy, and we met this Ben of flesh and blood who doesn’t know who these people are. It’s wonderful for the actor, Justin [H. Min], to be able to get to finally act with people other than Robert [Sheehan] and occasionally Ellen [Page]. I do think it’s going to be a lot of fun next season. I don’t get want to give anything away, but I think we have a great setup for things to come.

You don’t show the member of the Sparrow Academy’s faces. How are they different from the Umbrella Academy?
Steve Blackman: I can’t really say much about that. It was intentional that we blocked out their faces and just saw their silhouettes.

Back in 1963, we see Harlan and Sissy going to New Mexico, and he still has some of his powers. He’s twirling this bird. Is it safe to say that Harlan has something to do with the Sparrow Academy? I don’t know my birds very well, but it kind of looks like a sparrow.
Steve Blackman: I will only say this: Vanya was not successful clearly in removing all his abilities. She thinks she has, but she obviously left something behind. It’ll be interesting to see what happens to Harlan down the road.

By the end of season 2, is Vanya in a good place? The first and second season really showed the magnitude of her power and Vanya trying to understand it. Will she finally get a break?
Steve Blackman: I think she is a good place. In my personal opinion, I think if Sissy and Vanya didn’t have to go their own separate ways, they would have had a wonderful life together. I think Vanya sort of forgetting who she was in the beginning of the season allowed her to let go of all of that baggage of being this wallflower, being judged by the other family members, and thinking she’s an outsider. Without that memory, she could really be more of who she is. Now she’s not afraid of who she is. She had this wonderful love story with this woman and felt protective of her and Harlan. I think Vanya’s in a much better place. Even now that she got her memories back in episode 9, I still think this is a Vanya who is more empowered, more headstrong. I really think she would have had a wonderful life with Sissy going forward, but that wasn’t the future they got to have.

I really enjoyed The Handler once again this season. This woman has defied death before, but is she really gone this time?
Steve Blackman: We’re not going to see The Handler again. The Handler is dead. She didn’t get the benefit of having a metal plate in her head the second time around, so you won’t be seeing The Handler again.

When you talk about The Handler, you have to talk about Lila. She disappeared with the briefcase. Is it possible that she would turn up again? I feel like her story is not finished.
Steve Blackman: I’d say that it’s very possible. Her and Diego still love each other. I think in the beginning they were both using each other for different reasons. They fell in love, and I think the love is real. Lila’s very lucky. She has a briefcase. She can go anywhere in time and go any place she wants, so we’ll see what happens to her.

With having to say goodbye to Ben again and then seeing a version of him in the flesh at the end of the season, this feels like the beginning of a really big emotional journey for Klaus. This Ben is not the Ben he knows. This is a different person, in a sense.
Steve Blackman: I think you’re right on with that. I think it’s going to be a very emotional journey for Klaus. Truthfully, deep down, Klaus adored having Ben as his advisor, telling him what to do, what not to do. Even though Klaus seldom listened, he had a permanent friend, someone to always be there with him, and someone who tried not to judge him. Of all the kids, Ben was the kindest kid. Ben’s curse was that he was stuck with Klaus as a translator because Klaus never translated what he wanted to the other people well. That was sort of their curse with each other, but I think they love each other. They were good brothers to each other.

Alison and Luther had their own separate storylines for most of the season. I know that there’s two sides to this where fans ship them and don’t ship them. What does that kiss at the end mean for their relationship?
Steve Blackman: I remind people that in season 1 that kiss we saw never really happened. That was the day that wasn’t. That was the day that was rewound. The first time we’ve actually seen them really kiss is not a romantic kiss. It’s that kiss when he’s trying to breathe life back into her. I think what Allison had with Ray was a real grown up relationship. I think what Luther and Allison have is just puppy love. I think for Luther it’s much more real than it is for Allison. I think they adore each other. I think Allison would say that Ray was a real love, and Luther was from her childhood. I think Luther’s growing out of that notion thinking that it’s real love. He’s cutting ties. He’s no longer the man-child he was in season 1. He spent a year alone. He’s had some growth this year.

Allison spent a lot of time with Ray, and Vanya spent a lot of time with Sissy. Those were pivotal relationships for both of them. Would season 3 be even more of an emotional journey for them as they deal with leaving those characters behind?
Steve Blackman: The conceit of the show is 10 days of story time for them, so I think the aftermath would be very painful for them. They’ve lost the loves of their lives. It will be challenging to have to face immediately, but I think they both will be mourning these people that they literally saw hours ago. I think that it’s going to be very painful journey for both of them.

I’m guessing it’s safe to assume Reginald will have an even bigger presence in a potential season 3…
Steve Blackman: He’s a delightful actor. He brings so many layers to the character of Reginald Hargreeves. But this Hargreeves we meet in the real timeline should not be alive, and yet here he is. He knows who these people are. The events of 1963 are still playing out. He met them, but I think there’s definitely repercussions to having met them and this is an opportunity for Colm Feore to interact with all of our actors, which is so great.

The show has some incredible musical moments, but I think that Backstreet Boys montage was my favorite. How did the song make it into the show?
Steve Blackman: I can tell where it came. Just so you know, I do this show differently than most shows do it. I don’t add the music afterwards. I don’t do the edit, and then the music. I think of the songs ahead of time and encourage my writers to put them into the script. I often listen to a song and then figure out how to write a scene based on listening to the song. But I put them all in the scripts, so ahead of time the actors are listening to the music that I’m putting in the script. But that was a particularly tricky scene, and I didn’t know what I wanted. One or two the writers had come up with me to Toronto. It was late at night. We might have had a couple of cocktails. And then I thought of the song. I thought we could try this song against the scene. Everyone was like it can’t possibly work. What I love about the show is we strive to counterpoint songs, find songs that work against something you wouldn’t expect. In season 1, it was “Istanbul” at the end of the first episode. This [“Everybody’] is one of those songs where you instantly recognize the song. It’s a happy song. There are a lot of other things going on visually in front of you, but it fits together. That’s why music is another character of the show. We love music. It’s a big part of our show. I just love that we got the Backstreet Boys in, and it works so well in that sequence.

Have you been writing down songs that you would want to use for season 3 yet?
Steve Blackman: I have a great idea for some scenes in season 3. Not all of it. I have a master list of songs that I’ll be listening to and say this is a Klaus song, this is a Five song, this is a Luther song. Each of them has their own folders. There are definitely I want to fit into season 3.