Brielle Biermann and Michael Kopech‘s 2018 breakup was pretty bitter, but some fans want to see them get back together. She had claimed that the Chicago White Sox pitcher wanted to push pause on their two year romance so he could test the waters with other women. Now he’s back on the market, after filing for divorce from his pregnant wife, Riverdale star Vanessa Morgan, 28. Despite Michael ending his marriage just five months after a romantic wedding ceremony, some of Brielle’s fans actually want her to rekindle things with her ex-boyfriend.

Despite Michael’s red flags — a pregnant estranged wife, a super short marriage, a disastrous breakup with Brielle — some folks cheered on a reunion, while others trolled Brielle about Michael being single in the comments of a new Instagram post she shared. The 23-year-old could be seen in the driver’s seat of a white SUV with the window rolled down, showing off the Don’t Be Tardy star’s super glam makeup and sultry expression. Brielle captioned the July 28 IG photo, “looking for my shotgun rider” and fans flooded the comments about how Michael is now available.

looking for my shotgun rider🤍🤍 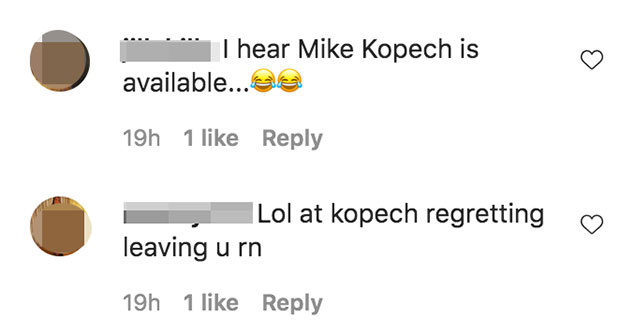 User @darleneguide wrote, “Michael? He need’s guidance. He should have known better than to get married so soon to her. Take the poor boy back,” while @joeieraci22 told Brielle, “Yo go get Mikey Back!” Fan jillzkillz commented, “I hear Mike Kopech is available…” while @mkelly715 added, “Lol at kopech regretting leaving u rn.” @calpal4lyfe advised, “Go pick up Michael. He divorced,” even though nothing has been finalized yet. User @amiej1913 snarked, “Kopech is single now. You can be step momma.” A true blue Brielle fan @makeupmaven11 wisely told the Bravo star, @briellebiermann so happy for you that you dodged that curveball!!!!”

Brielle made it clear she was done with Michael in a Feb. 2019 interview were she explained why they broke up in March 2018 after two years together. “It was more of him wanting to take a break, and he wanted me to wait on him,” she told TooFab. “And I was like, ‘I’m not gonna wait on you, dude. You clearly wanna go f**k around. You think I’m stupid? I’m not stupid. I’m not gonna be waiting for you to return. I have a life, too.’ He was like, ‘In a year, we can date.’ I was like, ‘Are you insane? No.'”

Within six months after his split with Brielle, Michael and Vanessa made their red carpet debut as a couple at a Sept. 2018 pre-Emmys party. He proposed to her on July 4, 2019 under a waterfall in the Arizona desert while on a camping trip, presenting her with a massive pear-shaped diamond ring. They wed in an ultra-romantic ceremony in Homestead, FL on Jan. 4, 2020 and appeared to have a loving future ahead as husband and wife.

But fans realized something was up when on July 24, Vanessa happily broke the news in a series of Instagram videos and photos that she was already three months pregnant and expecting a son. But she never mentioned Michael, and he didn’t appear in any of her joyous post material. In her caption, Vanessa noted that, “I am overjoyed to be welcoming my baby boy into the world this January,” with Michael’s name never coming up, and no “we” or “our” in the announcement about the baby.

One of the photos Vanessa shared was from the day she found out the newlyweds were expecting, showing two positive pregnancy tests dated May 20, 2020. But Michael then filed for divorce from her a month later on June 19 in Morris County, TX, not far from where he grew up. That news came to light on July 27, three days after Vanessa’s pregnancy announcement and gender reveal. HollywoodLife.com reached out to both Vanessa and Michael’s reps about the split, and they each responded with “no comment.”