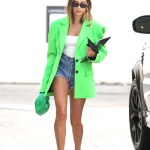 Larsa Pippen showed off her cool summer style, rocking a pair of short shorts while hanging out with her two teenage sons.

Does Larsa Pippen ever go a day without wearing a cute outfit? The Real Housewives of Miami alum, 46, posted an adorable photo to Instagram on July 13, showing what she wears during a typical day at home: high-waisted, shredded denim shorts, chunky sneakers, and a cropped David Bowie t-shirt. It’s a stark contrast from her usual micro-mini dresses and leather pants, but equally as cute.

Our team is good we don’t need a mascot

The focus of her new photo was on her teenage sons, though. In the pic, Larsa is proudly posing with her kids Scotty Pippen Jr, 19, and Preston Pippen, 18. The boys definitely inherited their NBA dad Scottie Pippen‘s height; they’re towering over their 5′ 2″ mother! Scotty and Preston, who both play basketball, as well, are dressed like they just came off the court. She captioned the pic, “Our team is good we don’t need a mascot.”

Her fans were loving the photo, too, and showered Larsa with compliments in the comments. “Hottest mom (..def can pass as their sister tho) ever beautiful fam,” one fan wrote, including the heart eyed emoji. “You look like their sister. Beautiful family!” another fan agreed. Gabrielle Union dropped yellow hearts in the comments, and Holly Robinson Peete left pink ones.

Larsa’s loving Daisy Dukes this summer. The stunner has rocked short shorts several times throughout quarantine, including during a trip to the beach, where she paired them with just a white bikini top. What a look!