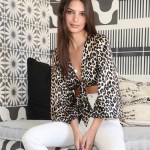 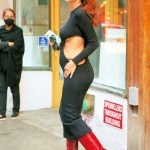 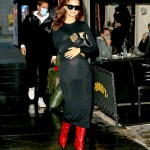 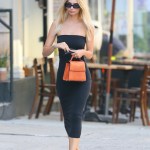 As lockdown restrictions ease in New York City, model Emily Ratajkowski stepped out in a strapless black dress for a Saturday afternoon stroll.

Emily Ratajkowski, 29, has a summer glow! The model recently returned to New York City, after quarantining in Los Angeles amid the COVID-19 pandemic, and she looked so chic while out and about on July 11. She was spotted strolling around Tribeca on the sunny Saturday afternoon, and looked a million bucks in a simple, strapless black dress. Emily’s freshly bleached blonde hair was on display as she parted it down the middle and allowed it to fall in soft, pretty waves.

The Inamorata founder accessorized with white sneakers, chic sunglasses and a bright orange bag. She also kept her jewelry quite simple as she opted for a pair of gold hoops and a gold bracelet. When she first left her apartment, Em Rata donned a black protective face mask, however she removed it while out for a walk.

Emily recently shocked fans when she debuted a totally new blonde hairdo! The model, who has been rocking iconic brunette locks for years, made the switch on June 23 — and she looks incredible! She showed off her new, icy blonde tresses in a sultry first post, simply captioned, “BLONDE.” Emily opted to keep her dark roots, which coordinate very well with her thick brunette eyebrows.

Emily thanked Kerastase Paris, a popular luxury haircare brand, which is responsible for her new do’. The We Are Your Friends actress also appeared on Kerastase’s Instagram Stories ahead of her hair makeover. “Can you guess what I’m doing?” she said, as parts of her then-brunette locks were hidden inside pieces of foil. Kerastase also shared a video and a few photos of the finished product.

“I’m in LA. I’m in my bed, drinking coffee, waking up as my first morning as a blonde,” Emily told ELLE, via phone, which teamed up with the model and Kerastase for the debut of her new look. “With quarantine, you’re staring at yourself in the mirror and you’re like, I need to change!” she confessed. Emily was quarantining  in LA with her husband, Sebastian Bear-McLard at the time.