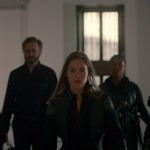 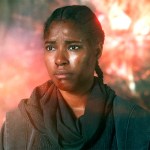 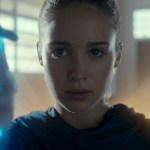 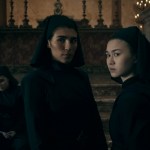 Warrior Nun fans had to say a prayer for Shotgun Mary after watching the season finale of the all-new Netflix series. After learning of Father Vincent’s betrayal and Adriel’s true nature, Ava and the other members of the Order of the Cruciform Sword are surrounded by people possessed by wraith demons. “In this life or the next,” Ava says to Lilith, Beatrice, Mary, and Camila. The women echo Ava’s words.

Suddenly, Shotgun Mary steps out from the huddle. “F**k that. In this life,” she says. She walks right up to the possessed people and starts to fight them off. Her life is left hanging in the balance in the final moments as the possessed people crowd around and attack her. HollywoodLife spoke EXCLUSIVELY with Toya Turner about what that ending for Shotgun Mary could mean for season 2 and more.

Okay, we need to talk about that ending. Were you surprised that the season ended right in the middle of the action?
Toya Turner: I wasn’t expecting that at all, especially since we have such a huge, huge cliffhanger with one of our lead characters already. I was not expecting it. There were so many questions at the table.

Obviously, Shotgun Mary’s fate is left open. Do you personally know what happens to her?
Toya Turner: I actually don’t know.

Do you have your thoughts or theories about what happens to her?
Toya Turner: There are so many different things that can happen, right? She could be a goner. She could be possessed. I mean, they left it so open. She could be under Adriel’s control. So many things could happen. Of course, I want it to be everything except for the death part.

Do you think in that moment, Shotgun Mary is content with sacrificing herself for the greater good?
Toya Turner: I do. I think that something has been awakened by Ava coming into the OCS. Something that she said, I believe it was in episode 8, was like, “Who’s going to die next? Is it going to be you?” I think she’d rather sacrifice herself if it means that we could stop all this… if we can keep Ava safe and the halo safe even for another moment.

One of the biggest shockers of the season is Adriel being alive. Over the course of the season, was there a part of you that thought he was alive?
Toya Turner: No, that was the one that I was shocked about. I actually had a couple of theories about Father Vincent more than I did Adriel. I did not expect him to still be alive.

Let’s talk about Father Vincent. I felt like the finale did such a great job of bringing everything full circle back to the very first episode when Shannon tells Mary to not trust anyone. Were you shocked that Father Vincent has been Team Adriel all along?
Toya Turner: Me, personally, I think Shotgun Mary is so hurt. But me as a person, I was thinking that something is not right about the way he’s acting. He was so like… this is what happened. It was an assassination. They were trying to kill it. He was not acting like the leader that I think he should be acting like, so that kind of turned it up for me. I felt like there was something dirty about this anyway. We got a whole bunch of kick-ass women under your control where you kind of snap your fingers and get them to do anything. I knew something wasn’t right. That was dirty.

Do you think Shannon’s words will haunt Shotgun Mary if she makes it out of this alive? I feel like this betrayal will be the hardest for Shotgun Mary to get over.
Toya Turner: I think she was the closest to Shannon, and then after that, it was Father Vincent before even any of the other girls. I think there was a family that she had. I think she’s crushed. That kind of goes back to the end moment. I think she’s just like… f**k it. Let’s end it. Keep the halo protected, but like, I’m done. What could I possibly do if Father Vincent is sheisty, too?

Now we know that Father Vincent killed Shannon. How do you think Shotgun Mary would handle that in a season 2?
Toya Turner: The next time she sees him, it’s on-sight. Period. That’s it. She’s coming to get him. I think torture should definitely be involved. It should not be quick and clean at all. They keep saying, yes, should be committed. She’s the crazy one. I think she won’t be contained like she’s been. She’s going to let loose even more.

How do you feel about that evolution with Mary and the other women over the course of the season?
Toya Turner: She’s gotten closer to them all. Closer than she ever has been. Especially after Shannon got the halo, her main objective and her love was more towards Shannon but losing Shannon kind of brought them closer. It started bringing them closer again, and she started to realize that she has lost all of her family. She still has some.

From the very beginning, we knew Shannon meant a great deal to Mary. They loved each other. Do you think that Mary has processed all of her grief about losing Shannon?
Toya Turner: She’s still processing the whole thing. She never gets a chance to really stop. Even the moment that she has when she goes and searches Shannon’s room, it was such a small, quick timeframe. It was about the business. She goes in, looks for the business, and finds it. She has a quick moment of vulnerability, and she’s back to the business. She’s been non-stop the whole time. The only time she really gets a chance to sit back is episode 6. I still think she has a lot of grieving to do.

What was the training process for you for this role?
Toya Turner: I knew how to shoot weapons. I’ve actually had gone to the range before, but it was a lot of physical training that I don’t think I’ve done since high school. It was 4 hours a day boxing, tactical team training, firing other weapons. Shotgun Mary does a lot of boxing, and she’s more of a boxer and more trained to take a hit. It was a lot of physical activity in that way.

Is there anything you would like to explore with Shotgun Mary in a potential season 2?
Toya Turner: I think I would like to see what she’s like when she’s not on a mission. I think I’d like to see what her private life is that she keeps talking about. I would also like to see the girls more outside of their element and in some civilian clothes. How are they in the world? Because they don’t go out as much as Shotgun Mary, so I would love to see how they interact with regular people and things like that. Get them out in the world and more action, please. I want to do a wheelie or something on a motorcycle and just shoot people with both guns and just be holding on with my thighs.

What does it mean to you to be a part of a show like Warrior Nun where women’s voices are at the forefront?
Toya Turner: It’s inspiring. It’s badass to see. For me, it’s seeing my dreams come true. Seeing women play villains and badasses and complex characters, it’s something that I’ve always wanted, just more representation for women, for black women. It’s a great time.