Rihanna is all smiles in new ad campaign photos for her latest summer Intimates collection for her lingerie empire, Savage X Fenty. The Grammy winner, 32, shows off her amazing curves and smooth Barbadian skin in a velvet, lace bra and panty set, courtesy of Vogue — which shared the photos. The magazine also introduced the names and images of four lucky fans Rihanna, herself cast in the new campaign.

Earlier in the spring, @badgalriri announced a casting search for the new faces of her summer campaign. Thousands applied, posting their best @savagexfenty snaps on Instagram. After months, four were chosen to represent the brand’s summer drop: @bsenyana, @kortney_russell (pictured above in slide 2), @fitnesswithfemininity, and @sariena_. Tap the link in our bio to meet them.

“Earlier in the spring, @badgalriri announced a casting search for the new faces of her summer campaign,” the magazine captioned a post on Instagram that featured photos of Rihanna and model Kortney Russell wearing the new Intimates collection. 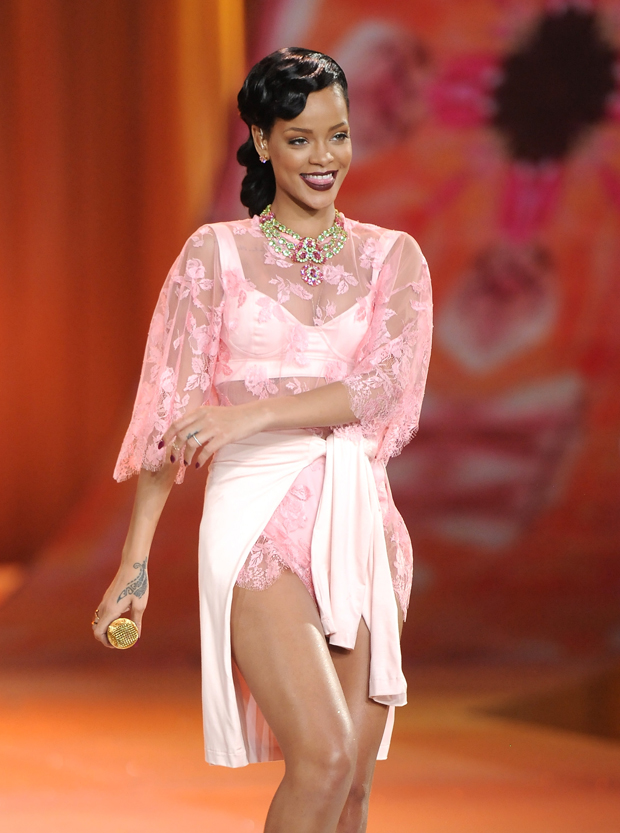 Rihanna performing during the 2012 Victoria’s Secret Fashion Show in New York, NY on November 7. The show was broadcast on CBS that year on December 4. (Photo credit: Evan Agostini/Invision/AP/Shutterstock)

As for how the models were selected? — Rihanna, being the hardworking mogul that she is, contacted the women personally.

“I got a DM from the Savage IG page notifying me that I had been selected, and literally my world stopped,” Senyana told Vogue. “I have entered contests before, but you almost never think it is going to be you — you just hope. Well, today it’s me, and I am taking it all in!”

In accompanying interviews, the models each told Vogue why Rihanna’s campaign, and brand alone, is so important for them to part of. And, who wouldn’t want ‘modeling next to Rihanna’ on their resume?