Gigi Hadid gave fans a small detail about her first pregnancy during an Instagram Live conversation in June. The pregnant supermodel, 25, revealed that it’s all about the “angles” and “baggy clothes” when it comes to hiding her growing baby bump. A fan questioned how she concealed her belly for the Live, in which Gigi spoke with New York City-based chef and welfare advocate Sophia Roe to help educate others on how to be better allies in the fight for racial equality.

“How do you not have a tummy??” the viewer asked in the comments, sharing, “I’m 4 months into my pregnancy and my tummy is huge you look great tho!” Gigi, whose bottom half wasn’t included in the video frame, replied, “This angle and the really baggy jumpsuit make for an optical illusion. From the side it’s a different story!” she joked, adding, “Haha — wishing u the best!” Gigi, who’s believed to be about six months along in her pregnancy, was dressed in a beige, long sleeve jumpsuit with her hair tied back. 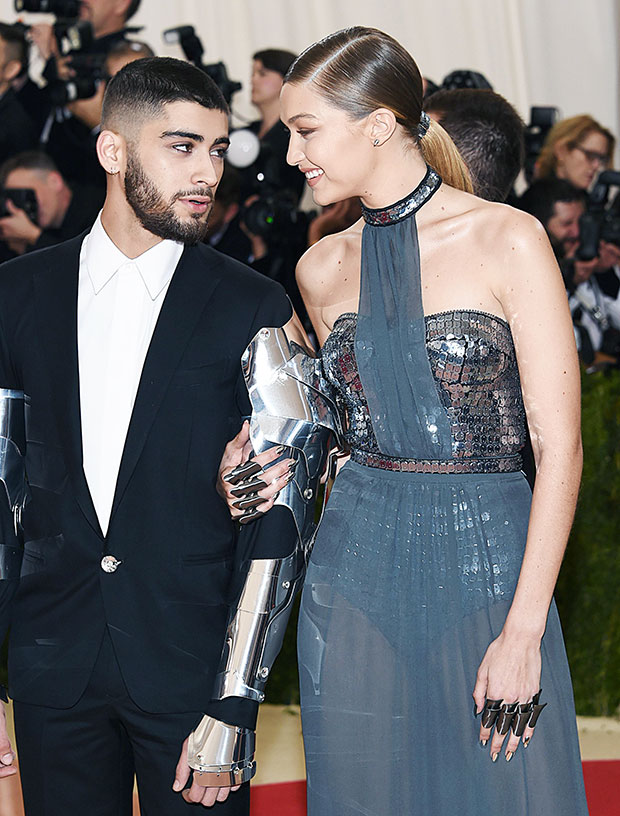 Gigi confirmed she’s expecting her first child with boyfriend Zayn Malik during an appearance on The Tonight Show With Jimmy Fallon on April 30 — four months after the couple rekindled their on-again, off-again romance.

“Obviously, we wished we could have announced it on our own terms, but we’re very excited and happy and grateful for everyone’s well wishes and support,” Gigi told Fallon, referencing pregnancy reports that circulated right before she appeared on the late night talk show.

The expectant couple is currently quarantining together, along with Gigi’s sister Bella, at their mother Yolanda Hadid‘s farm in Pennsylvania. Gigi celebrated her 25th birthday at the end of April and shared a collection of photos with her boyfriend and family (as seen above). Although, her bump wasn’t visible in the snaps.

Had the sweetest day celebrating my 25th birthday with my quarantine family, who made it so special for me, along with all the love I felt from all over the world! Thank you to everyone for the birthday messages, I carried you with me yesterday!! 💛🙏 I am grateful and lucky that my family and friends -near and far- are healthy and safe, and although I missed loved ones I wish I could have celebrated with, know that these times will make us even more grateful for togetherness to be had in the future ! I will never forget my 25th bday! +++The icing on the perfect quarantine bday was finding out my surprise everything-bagel-cake was made by the one and only Cake Boss @buddyvalastro who I have watched for over a decade. I CRIED REAL TEARS! BUDDY! This is a dream come true. I can’t believe you made this cake for me while the bakery is closed. It means more to me than you know, and when we hopefully meet some day you will truly know that there almost isn’t an episode I’ve missed. 10/10 would be a Carlo’s intern whenever needed. 😆 Grateful, honored, your biggest fan. 🥯🥯🥯🥯🍰

(Photo credit: Gigi Hadid/Instagram)
A source recently told HollywoodLife that Gigi and Zayn’s loved ones wouldn’t be surprised if they got engaged, or even married before she gives birth. “Zayn is determined to marry Gigi,” the insider said, though the couple has kept their romance private. “He is very eager to make her his wife. It won’t shock any of their friends if they secretly get married before the baby is born,” the source said, adding, “They can always do the big wedding after [the birth].”
Gigi and Zayn began dating in 2015 and announced that they had split for the first time in March 2018. They later reunited, and broke up again in January 2019. Gigi went on to have a brief fling with Bachelorette alum Tyler Cameron, who was spotted with the model at her grandmother’s funeral in the Netherlands in September 2019. Gigi and Zayn got back together for good in January.
Sidebar Content
ad