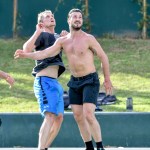 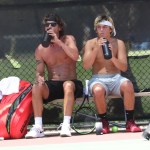 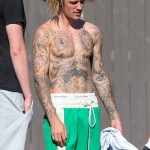 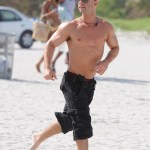 Gavin Rossdale was spotted out with two of his sons just days after Gwen Stefani didn’t publicly acknowledge him on Father’s Day.

Let’s burn some calories! Gavin Rossdale, 54, enjoyed some quality father/son time with his kids Kingston, 14, and Apollo, 6, at the tennis court on Friday, June 27. The Bush lead singer put other A-list studs half his age to shame by showing off his impressive abs while working up a sweat with his eldest child. The two were seen taking a break from the sports madness at one point where they were seen rocking gym shorts and sweatbands. Kingston, who Gavin shares with ex Gwen Stefani, 50, along with Apollo and their other son Zuma, 11, added some color to his workout ensemble by sporting a pair of bright red sneakers.

It was a rare outing for Gavin and his kids during the Coronavirus pandemic. He was, however, spotted out with Zuma on May 27 on their way to the doctor’s office in Beverly Hills. They each wore black protective face masks with Zuma showing off his colorful style in a multi-colored Nike t-shirt, red shorts, flip flop and ankle socks.

The Grammy-nominated performer posted a cute throwback pic with Kingston on Father’s Day where they held each other’s hands in the water. “happy father’s day — to all fathers doing their best -world is crazier than ever – they need us more than ever – we protect -we provide – we lead – we love -we do our best -it’s all for those we love the most,” he captioned next to the sweet photo.

Gwen’s Father’s Day tributes did not include Gavin. She instead chose to focus on her longtime boyfriend Blake Shelton, 44, by posting several photos of him with their three sons and praising him for helping “raise these boys.” One fan in the comments section hailed the country crooner as the “best stepdad ever” while another wrote, “Wow! You sure can see the love between Blake and the boys! So heartwarming.”

Gwen and Gavin married in September 2002 in London before she filed for divorce from him nearly 13 years later. The divorce was finalized on April 8, 2016. She and Blake have been in a relationship for nearly five years.