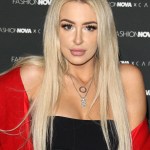 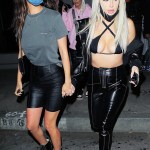 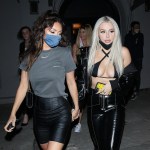 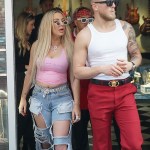 Tana Mongeau celebrated her 22nd birthday with a tequila-filled bash at a mansion in Beverly Hills on June 24! Get the tea about her party, including the influencer-filled guest list, the balloon decor, food and more!

Tana Mongeau had thee party of all parties on Wednesday night in celebration of her 22nd birthday! The YouTube sensation documented her big bash in a series of Instagram Stories, as did her internet personality pals. Tana’s party took place in a swanky Beverly Hills mansion with landscape views of LA through ceiling to floor glass windows.

“Natalie [Bohling] really made my birthday house so cute, like so f–king cute, I can’t,” Tana said as she filmed herself walking down to an epic party set-up put together by her friends. White and silver balloons lined the stairs, which led to a table with napkins that spelled out Tana’s name in pink and black letters. Elsewhere in the massive home, a pair of “22” silver balloons floated in the air.

Once guests made their way outside, they were greeted with a brunch-style table that was filled with strawberries, grapes, kiwi and more. Glass chalice cups were placed near each plate setting, and a chalkboard sign that read “Happy Birthday Tana” sat at the head of the table. Guests sat on white pillows and blankets. As for the food, Tana kept it simple and extremely relatable. A smorgasbord display table featured tons of chicken sandwiches topped with pickles, slider burgers, shrimp cocktail and more.

Prior to the celebration, Tana got party-ready with the help of celebrity nail artist, Jennisse and hair stylist Laura Rugetti. Later on in the night, Tana ended her birthday bash with pizza from Thick ‘n’ Tasty.