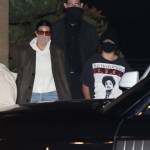 Mason Disick put his best dance moves on display in a new TikTok video that you have to check out!

You better work! Mason Disick, 10, effortlessly flowed to the beat while showing off his best dance moves on Sunday, June 21. He bopped along to “100 Racks” by Quality Control and Offset with mommy Kourtney Kardashian‘s pal Addison Rae, 19, in yet another viral dancing challenge inspired by the song’s title. It was all eyes on Addison towards the beginning of the clip before she pulled Mason in for their super cute choreographed number. Both rocked relaxed outfits for the viral footage with Addison keeping it cute and simple in a black t-shirt and tie dye pants while Mason sported a printed sweatshirt and dark sweatpants.

Don’t forget about me! Kourtney also enjoyed a little TikTok fame with Addison in a separate video shared over the weekend. The gorgeous gals wore matching white sweaters that featured colorful love hearts in a super cute clip captioned as “take 5”. They could not wipe the smiles off their faces while doing their own synchronized choreography which looked to be filmed in a massive closet.

Kourtney & Addison weren’t done with their TikTok fun days later on Tuesday, June 23. They reenacted one of the more memorable Keeping Up with the Kardashians scenes where Kourtney played herself while Addison took on the role of longtime KarJenner BFF Larsa Pippen, 45. “I mean, I feel fine, I just cry myself to sleep every night,” Kourtney lip synced to which Addison (as Larsa) responded, “Yeah, that’s totally normal.”

A little confused about what Kourtney & Larsa were talking about in that scene? No worries because we’re here to help! The clip actually took place when the Poosh founder was going through the process of freezing her eggs. This meant she was injecting herself with hormones which led to her having some big mood swings.

♬ Cry myself to sleep every night – Juju🦋

Her weekend wasn’t all about being giggly and stuff. Kourtney also spent a little time praising her ex-boyfriend Scott Disick, 36, in a sweet Instagram snap posted on Father’s Day. “Happy Father’s Day,” Kourtney wrote next to a photo of them with their kids Mason, Penelope, 7, and Reign, 5. “Thankful for you and these three special ones.”