Meghan McCain spent Saturday night “highly entertained” by President Donald Trump and his campaign rally in Tulsa, Oklahoma. During Monday’s episode of The View, the pregnant co-host, 35, was asked about her reaction to the estimated 6,200 people that attended the rally. Initially, the Trump campaign advertised a huge outcome, noting that hundreds of thousands of supporters reserved tickets to the rally. “I have so much to say about this,” Meghan began, before co-host Sunny Hostin chimed in to jokingly note that Meghan “loved” the rally “so much.”

WHAT’S BEHIND LOW TRUMP RALLY TURNOUT? The president touched on everything from COVID-19 to the NFL in his first campaign rally in months on Saturday with a crowd that turned out to be large, but had plenty of empty seats — the co-hosts weigh in. https://t.co/qXOZfZplMj pic.twitter.com/6BSIPYJ11r

“I was actually texting Sunny and Joy [Behar] throughout the entire evening,” Meghan said. “I was like, ‘Inject this into my veins,’ because, the Trump campaign has been really braggadocios, saying, ‘8,000 people are going to show up,'” she recalled. “And, to have 6,200 people show up, whatever the reasoning is. To say that it was far below expectations is putting it very mildly.”

Meghan continued, “What’s fascinating to me, also, there’s optics in every campaign that stick with the American public. She went on to list notable moments from the campaigns of past politicians including, Howard Dean and George W. Bush. “I actually think the image of President Trump in front of a one third full arena and then getting off his plane with his tie undone, holding a MAGA hat, looking depressed — this is an image that’s going to stick with the American public,” she proclaimed. The View went on to show the image of Trump exiting his Marine One aircraft, as Meghan described. 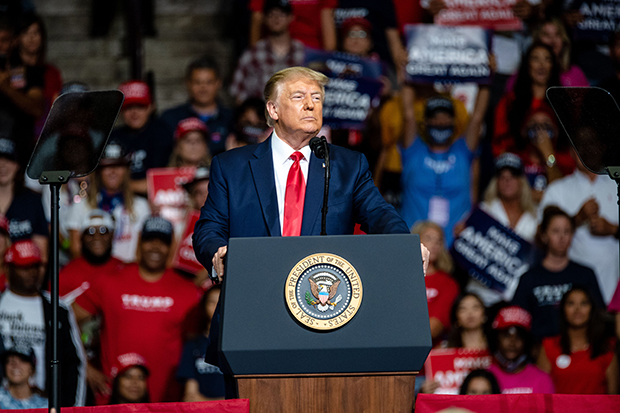 “Does this look like someone who’s confident? Does this look like an American President?” Meghan questioned. “No, this look likes a depressed person who just realized maybe just maybe the writing is on the wall right now. I think this is the image that is going to haunt the Trump campaign,” she explained.

“They can spin this any way they want. [White House Press Secretary] Kayleigh McEnany was on Fox & Friends trying to spin it, and Fox & Friends was having none of it this morning. This is bad, bad news for the Trump campaign,” Meghan continued, adding to her fellow co-hosts, “I couldn’t help it, ladies, I just had to text you because I was shocked and highly entertained throughout the night on Saturday.”

On Fox & Friends, Kayleigh McEnany says "the president was not angry at all" that his Tulsa rally had relatively low attendance — in fact, she says, Trump "was in good spirits on Marine One" because the rally "was a huge success." pic.twitter.com/1vtK2ipmka

If you didn’t tune into Fox & Friends on June 22, White House Press Secretary Kayleigh McEnany claimed the president was in “great spirits” and noted that he’s his happiest when he speaks to the American people.

Trump initially scheduled the re-election campaign rally to take place in Tulsa on June 19, also known as Juneteenth — which has come to symbolize the end of slavery in the United States. Tulsa, Oklahoma was the site of the 1921 Tulsa Race Massacre against the city’s Black residents. The president moved the event to the next day on June 20 after he received immediate backlash in light of the Black Lives Matter movement — as well as ongoing protests against police brutality after the May 25 murder of George Floyd in Minneapolis.