There’s major shakeups happening within The Real Housewives of Atlanta! Just yesterday, Eva Marcille confirmed that she won’t return for season 13, in a statement to HollywoodLife. But, who will continue to hold a peach in the opening credits of Bravo’s Atlanta franchise?

“Cynthia [Bailey], Porsha [Williams], Kenya [Moore], Kandi [Burruss] and NeNe [Leakes] were sent contracts to return to the show full-time,” a show source tells HollywoodLife, exclusively. Friends of the cast, Marlo [Hampton] and Tanya [Sam] “have been asked back” in their same roles. “They’re all planning on returning,” the source reveals, noting, “A few of them have signed their contracts already, while a few haven’t yet.” 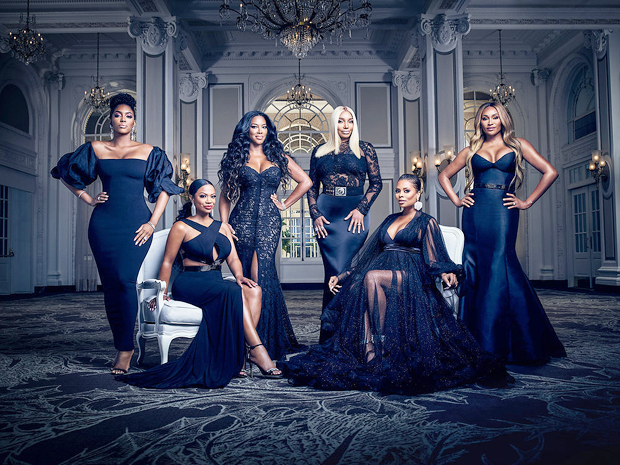 As for who will replace Eva? While that’s still unclear, “Sheree [Whitfield] is seriously being considered to rejoin the cast for season 13,” the insider says. Sheree appeared as a friend in season 8 and was a series regular again in seasons 9 and 10.

“Phaedra [Parks] will not be considered while Kandi is still on the show,” the source says, adding that producers are “looking into casting at least one [housewife], but would like two other women right now to round out the cast.” Fans of the show will remember Phaedra, a lawyer, joined RHOA in season 3. She departed after season 9, following allegations that she made up a story about Kandi having a sex dungeon in her basement.

The insider adds that filming on RHOA is scheduled to begin this coming July. And, “Cynthia’s wedding is still on as of right now, and plans are in motion to have a crew there.” Cynthia has previously said that her wedding with Mike Hill is still set to take place in Atlanta on October, 10, 2020, despite the COVID-19 pandemic.

“It is absolutely not true that Nene has been fired from RHOA. Furthermore, it was made abundantly clear prior that she will always be welcome on the series as long as she wants to be,” Grossman said. “We are having on-going bigger picture conversations with NBC Universal and have not made any decisions regarding next season specifically. Any speculation or sources trying to create controversy by stating otherwise are incredibly inaccurate.” He added “Bloop” at the end of the statement, referencing NeNe’s go-to catchphrase.

HollywoodLife recently spoke with Marlo Hampton, who explained why season 13 will be much different than past seasons. “Because this is a movement — a movement that we didn’t even see coming,” she said in reference to the ongoing Black Lives Matter protests after the death of George Floyd on May 25. “I’m positive things will change,” Marlo said. “I feel that with us addressing the issues to the executives, having that call, coming together with the changes that they’re already making. And they’re literally making changes, not just donations.”

Despite potential changes to the franchise, Marlo assured that the drama will remain the same, if not more. “You know this is still The Real Housewives Of Atlanta and there’s definitely going to still be some drama! You know unfortunately we’re still going to have some drama,” she said, noting, “But for the most part, I think that we’re definitely gonna pull it together and do what we have to do for the for the community.”