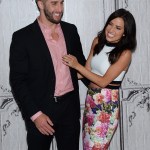 In the most dramatic ‘DWTS’ cast member announcement ever, ‘The Bachelorette’ star Kaitlyn Bristowe joined the season 29 cast. When Kaitlyn found out, she told BF Jason Tartick that she was ‘freaking out.’

Kaitlyn Bristowe, 34, got the best surprise of her life during her catch-up interview with Chris Harrison, 48, on The Bachelor: Greatest of All-Time special on June 15. Chris teased to Kaitlyn before his big ask that her “life was about to change.” The Bachelorette season 11 alum looked to boyfriend Jason Tartick, 31, and asked, “Do you know about this?”

Jason was clueless as well. “I just got goosebumps,” he said. Chris continued and asked Kaitlyn if she would be on the next season of DWTS. As soon Chris asked, Kaitlyn’s mouth dropped wide open. Jason was stunned as well.

“Are you kidding?” a muffled Kaitlyn asked through her hands. Chris stressed that he was being “dead serious.” Kaitlyn admitted that she was shaking and going to cry.

“I feel like this is back to the moment where you told me I was the Bachelorette,” Kaitlyn said. “That [the DWTS ask] is the last thing I thought in the world you were going to say.” Kaitlyn added, “I’m literally freaking out!” When Chris asked whether or not she was agreeing to join the show, Kaitlyn said “yes” multiple times.

Joining DWTS is a dream come true for Kaitlyn. Back in 2019, she claimed on the Talkhouse Podcast with Nikki Glaser that The Bachcelor creator Mike Fleiss prevented her from joining the show. “They won’t let me [go on the show], ever,” Kaitlyn said. “I’ll tell you exactly why I can’t go on Dancing with the Stars. Anybody that listens to this podcast knows why I cannot go on Dancing with the Stars. And it’s because, and I will say this with a mic in my hand and a smile on face, that Mike Fleiss is a piece of sh*t. He is the creator of The Bachelor, and he hates women.” Kaitlyn also claimed in 2017 that she was offered a DWTS contract, but Mike said he “didn’t want people wanting fame after his show.”