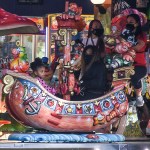 Serena Williams and her sweet daughter, Olympia, were the spitting image of Belle from ‘Beauty & The Beast,’ as they sang along and danced to the film’s opening tune!

Serena Williams and her sweet daughter, Olympia, were back in matching princess attire on June 11 as the mother-daughter pair were captured singing and dancing along to the classic Disney tune “Belle” from Beauty & The Beast! In the clip, which the 23-time Grand Slam champion, 38, shared to her Instagram account, Serena waltzed over to her couch, placing a container for popcorn on the sofa. She wore the exact same dress that her two-year-old was wearing — the iconic gold gown Belle changes into during the latter half of the film!

As she glided around the room, Serena belted the lyrics “Little town, it’s a quiet village/ Everyday like the one before.” Her youngster, born Alexis Olympia Ohanian Jr., followed her mom all around the room, mimicking nearly every step that she took! Eventually, Serena broke out into dance as the music became more upbeat. Even more impressive, Serena knew practically every single word, down to the spoken lines that Belle says in the film!

Serena, who shares Olympia with husband Alexis Ohanian Sr., has been spending quite a lot of quality time with her sweet baby girl in their Florida home while in quarantine amidst the coronavirus pandemic. Funny enough, a lot of that time has been spent in princess dresses! The tennis living legend and her precocious little one have shared with their adoring fans their new fashion statements time and again on social media, rocking tulle dress-up gowns and princess frocks as they play and bond!

While being a full-time mom and tennis phenom, Serena has also worked with her husband to ensure that their daughter knows they are paving the way for her to have a brighter future. On June 5, the Reddit co-founder, 36, shared a video to his Instagram account announcing that he would be stepping down from the board of Reddit and urging his co-workers to hire a Black candidate to take his place. “I’m saying this as a father who needs to be able to answer his Black daughter when she asks: ‘What did you do?’”

Serena was incredibly proud of her husband’s decision, taking to Twitter the same day to praise Alexis‘ thoughtful action. “Having diverse views on any boards is important. So proud of you Alexis. I know Olympia will be too.” During their time in quarantine, Serena and Alexis have really put the focus on spending time with Olympia, and we adore every new video, post, and update they share!