Tiffany Haddish appeared on the June 9 episode of Late Night With Seth Meyers and explained why it was important for her to attend George Floyd‘s memorial service in Minneapolis. The comedic actress, 40, told the host that she understands how Floyd’s family feels because she witnessed people “be slaughtered by the police” as a teenager. Floyd, an unarmed black man, died after being restrained by former Minneapolis police officer Derek Chauvin, who held his knee down on his neck for nearly nine minutes on May 25.

“I have watched people be murdered in front of me as a 13-year-old, 14-year-old girl,” Tiffany recalled during a virtual appearance on the late night talk show. “And there was nothing I can do except, ‘No! Don’t do that!’ Just yelling out. What does that do? And so, I wanted to be there in support of the family ’cause I understand how they feel,” she said, explaining, “And being there was like being there for all my friends whose funerals I already went to. But all my friends who passed away, all the people that I went to school with who’ve passed away, have been locked up for no reason just ’cause they can’t afford a good lawyer or, you know, accused of things that they didn’t do.” 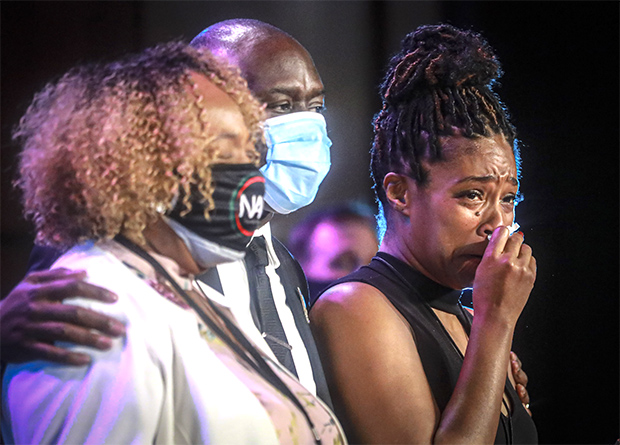 Tiffany was one of the many stars who attended Floyd’s Minneapolis memorial at Trask Word and Worship Center on June 4. The Girls Trip actress, who sat next to civil rights attorney Ben Crump and Eric Garner‘s mother Gwen Carr, went on to explain how emotional she became at the service.

“I was crying so much, and it was like tears of, not just for Floyd, but for all of those people that passed away and all of my friends and my family members that are locked up,” she remembered. “It was like all the tears that I ever wanted to cry were coming out.” 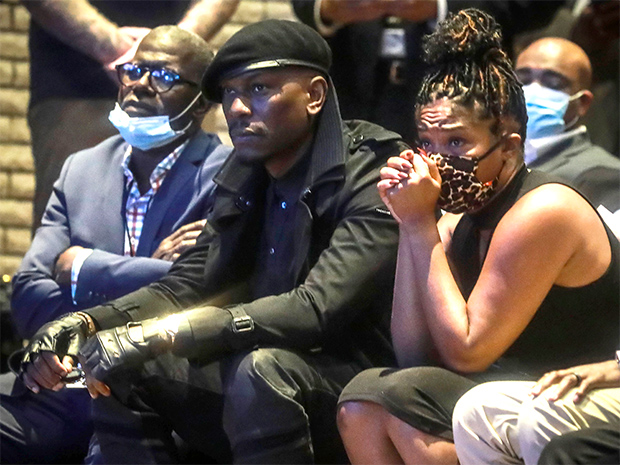 Tiffany also recalled standing in silence for eight minutes and 46 seconds — the amount of time Chauvin knelt on Floyd’s neck.

“When they had that moment of silence — that eight minutes and 46 seconds of silence on that stage — and I’m standing there, next to one of the mothers of a victim, and the quietness and then the thought of what if someone’s knee was in my neck for this long?” she questioned, adding, “How helpless were my friends when they were being attacked, you know?”

Tiffany continued, “The tears — I was trying to swallow them. And they was coming out through my nose, and my mask was full of snot. And I was, like, holding it, trying to, like, keep the snot off my mouth. But there ain’t no holding it,” she admitted, explaining, “And I wasn’t going to take it off ’cause I didn’t want to look like a scene out of a bad movie. The pain, the amount of pain that I felt was tremendous.”

Among the celebrities in attendance at Floyd’s memorial service were Kevin Hart, Ludacris, Master P, T.I., Tyrese Gibson and film producer Will Packer. Minnesota senator Amy Klobuchar, Martin Luther King III and Reverend Jesse Jackson were also in attendance. In addition to the Minnesota memorial service, two other services for Floyd were held in North Carolina and Texas. He was laid to rest in Houston on Tuesday, June 9.

Floyd’s death sparked nationwide protests that are still ongoing against police brutality and racial injustice in the black community. Chauvin was arrested and charged with third-degree murder and second-degree manslaughter in the death of Floyd on May 29. His charge was increased to second-degree murder as of June 3, when the three other officers involved in Floyd’s arrest — Thomas Lane, Tou Thao and J. Keung — were charged with aiding and abetting murder.