Kendall Jenner has broken her silence about George Floyd’s death with an Instagram post on June 1. “To everyone reading this and to myself: Keep researching, reading and educating yourself on how we can become better allies,” Kendall wrote. “I’ve been doing a lot of thinking these past few days and my heart has been so heavy. I’m angry and hurt just like so many. I will never personally understand the fear and pain that the black community go through on a daily basis, but I know that nobody should have to live in constant fear.” 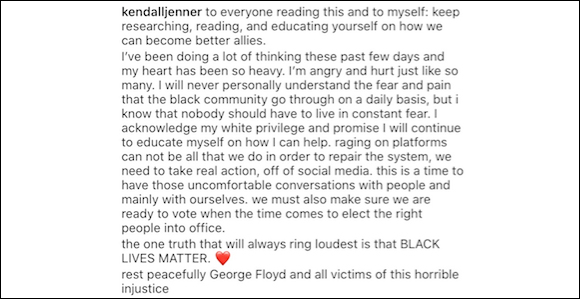 She continued by revealing how she plans to do better when it comes to issues of race in the future. “I acknowledge my white privilege and promise I will continue to educate myself on how I can help,” Kendall added. “Raging on platforms can not be all that we do in order to repair the system. We need to take real action, off social media. This is a time to have those uncomfortable conversations with people and mainly with ourselves.”

To conclude her message, Kendall urged her followers to be ready to vote “the right people into office” in the upcoming election later this year. She also added, “The one truth that will always ring the loudest is that BLACK LIVES MATTER. Rest peacefully George Floyd and all victims of this horrible injustice.”

George was killed by white police officer, Derek Chauvin, during an arrest on May 25. Chauvin held his knee into George’s neck for more than eight minutes, despite George yelling out, “I can’t breathe.” Chauvin was charged with third-degree murder and second-degree manslaughter.

The killing was captured in a video that quickly went viral, and led to a widespread call for justice. In response to George’s death, protests have also broken out across the country. Celebrities like Halsey, Yungblud, Camila Cabello, Madison Beer, Shawn Mendes, Ariana Grande, Porsha Williams, Cole Sprouse and many more have taken part in protests in their respective areas.