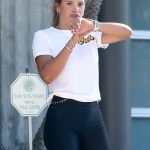 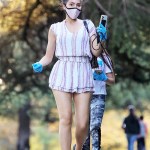 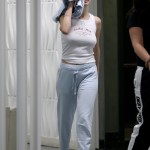 As Sofia Richie gives Scott Disick ‘space’ following his stint in rehab, she was photographed out and about with a friend on May 21, and looked stunning while wearing no makeup.

Sofia Richie is letting her natural skin shine during quarantine, and she proved it by stepping out without makeup on May 21. Sofia was photographed with a friend in Malibu, and she went makeup-free for the outing. The model looked fresh-faced, with her hair pulled back into a ponytail. She kept it comfortable and casual by wearing spandex bike shorts and a loose white t-shirt. However, she dressed up the outfit a bit with hoop earrings and bracelets. Overall, Sofia looked stunning!

The 21-year-old has been spending a lot of time in Malibu with her friends over the last several weeks. Her time by the beach comes following longtime boyfriend, Scott Disick’s, brief stint in rehab. Scott’s lawyer, Marty Singer, confirmed that the 36-year-old checked into a treatment center on April 28 to “deal with the pain that [he’]s been silently suffering” due to his parents’ deaths in 2013 and 2014. However, when a photo of Scott at the facility leaked on May 4, he immediately checked out after just six days. Since then, Scott has remained out of the spotlight, but he appears to have returned home, as he posted a photo of his daughter, Penelope Disick, 7, by the pool on May 20.

On May 21, reports surfaced that Scott and Sofia are “taking a break” from their nearly three-year relationship following Scott’s rehab stay. Fans had started speculating that Sofia had begun dating someone new, as she was photographed with a mystery male amidst her group of friends in Malibu. However, HollywoodLife has EXCLUSIVELY confirmed that any Sofia is NOT seeing anyone new at this time.

“Scott’s very focused is on getting healthy right now, so Sofia’s giving him the space to do that,” a source close to the couple told us. “But any suggestion that she’s dating someone new is ridiculous. All she’s been doing is spending time with friends.” Scott and Sofia started dating during the summer of 2017, two years after his split from Kourtney Kardashian.