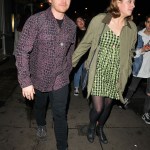 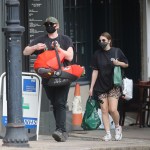 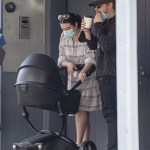 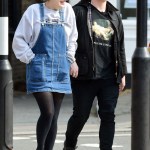 For the first time ever, Rupert Grint and his girlfriend Georgia Groome were pictured in public with their newborn daughter! The family took a walk 13 days after Rupert and Georgia announced their first child’s birth.

Rupert Grint, 31, Georgia Groome, 28, and their baby girl emerged for a family of three outing on May 21, marking this the first time the trio has ever been photographed in public! The Harry Potter alum and Angus, Thongs and Perfect Snogging star took their newborn daughter, who was riding in a black stroller, out for a stroll in London. The parents matched the pram in head-to-toe black outfits, and were further incognito thanks to a pair of black shades and blue face masks. You can see Rupert and Georgia’s first photos with their baby girl, here!

Fans are still wrapping their heads around the fact that Rupert, who played the beloved wizard student Ron Weasley in the Harry Potter film series, is now a dad! The pregnancy came as a surprise, since Georgie was first seen with a baby bump during an outing to Whole Foods in North London on April 9 — just short of a month before she and Rupert confirmed their first child’s birth.

“Rupert Grint and Georgia Groome are delighted to confirm the birth of their baby girl,” a rep for the actors and parents told HollywoodLife. “We would please ask that you respect their privacy at this very special time.”

Rupert and Georgia have been known to be notoriously private throughout their relationship, which reportedly began in 2011. Neither have an Instagram account, although Georgia does tweet occasionally. However, Daniel Radcliffe (who played the Harry Potter to Rupert’s Ron) made sure to send his congratulations to his childhood co-star!

“Yes, I texted him the other day. I’m so happy for him. It’s very, very cool,” Daniel gushed to Andy Cohen during the May 18 episode of Watch What Happens Live with Andy Cohen. The Guns Akimbo star added, “It’s also, like, super weird for me to think that we are all at the age where we are having children but we definitely are.”