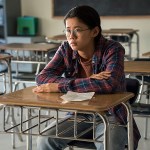 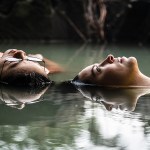 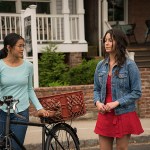 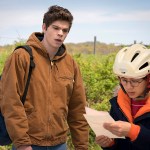 ‘The Half of It’ is one of the best coming-of-age movies in a long time. HL spoke with Wolfgang Novogratz about Trig’s big rock star moment at the talent show and working with director Alice Wu.

The Half of It was released May 1 on Netflix and instantly captured everyone’s hearts. The movie won the Founders Award for Best Narrative Feature at the 2020 Tribeca Film Festival. The Half of It follows the smart and introverted Ellie Chu who helps a school jock named Paul woo the girl he likes with love letters. Ellie doesn’t expect to become friends with Paul or fall in love with his crush, Aster. Wolfgang Novogratz plays Trig Carson, Aster’s boyfriend and the so-called “king” of Squahamish.

One of the most memorable moments of the movie is when Trig performance an electric rendition of Berlin’s “Masquerade” at the Squahamish talent show. While Wolfgang seemed like a natural musician, he had never sung or played guitar before The Half of It. “In the script, all that it said was Trig performs in the talent show. The way it was written, I assumed it was going to be a quick shot of me on stage and then goes to Ellie character and her big number,” Wolfgang told HollywoodLife EXCLUSIVELY. “A couple days before Alice [Wu] comes over and she tells me I’m going to learn this song. They’re going to give me a guitar lesson with this great musician from Brooklyn, and I’m going to sing the entire song all day. My last day of filming was spent 12 hours of performing the song from start to finish for like 300 extras — and I never sang or played guitar in my life, so it was pretty nerve-wracking.”

He added: “I spent literally the night before with this great musician. He taught me all the chords for the song so that I would know where to put my hand and it would look like I knew what I was doing. We just spent the whole night watching YouTube videos of Bruce Springsteen and Mick Jagger. All the dance moves and all that stuff is just me from take to take with Alice saying to try this and try that. I was just trying to be a rock star.”

There’s no doubt that Trig appears to have everything he wants. However, he is more than a little “blissfully unaware,” as Wolfgang puts it. The actor believes Trig will likely always have that small-town life mentality. “I always saw him as the golden boy of this small town, and he’s kind of got his whole life mapped out for him,” Wolfgang said. “His dad runs a big graveling business. After high school, I’m not even sure he’s going to go to college, but he proposed to Aster and will marry Aster and then take over his family’s business. He’ll kind of live the life he’s been living in high school. He’s the king in this small town, and I don’t think he has real aspirations beyond that. I think he’s a pretty simple guy who doesn’t really think. He is kind of blissfully unaware. His life is great, and I don’t think he really is very introspective.”

The Half of It was written, directed, and produced by Alice. Wolfgang opened up about working alongside Alice and immersing himself in the world she created. “I had a really nice time working with Alice on set,” Wolfgang said. “I think she is very emotionally intelligent. With all the characters, she was really making sure that these were real people. Even though they’re younger and set in high school, their feelings and their desires and their motivations matter. I think she would just talk to us in a very sophisticated, adult way and she’ was never dumbing things down.”