Fresh air Fridays! Chadwick Boseman stepped out to walk his dog on Friday afternoon, amid concerns from fans about his recent dramatic weight loss. The Black Panther actor, 42, was photographed on a sunny stroll near his home in Los Feliz, CA. Despite wearing a baggy ensemble, the actor appeared to still be sporting his thinner frame.
Chadwick kept a low profile in a grey sweatshirt with the hood pulled over his head. He sported bright, patterned pants and sneakers. The actor wore a black face mask amid the COVID-19 pandemic.
He sparked headlines in April after fans pointed out that he was noticeably thinner in a video he posted to social media. That same month, Chadwick was seen walking around his neighborhood with a walking stick. He was joined by his mother on the outing. 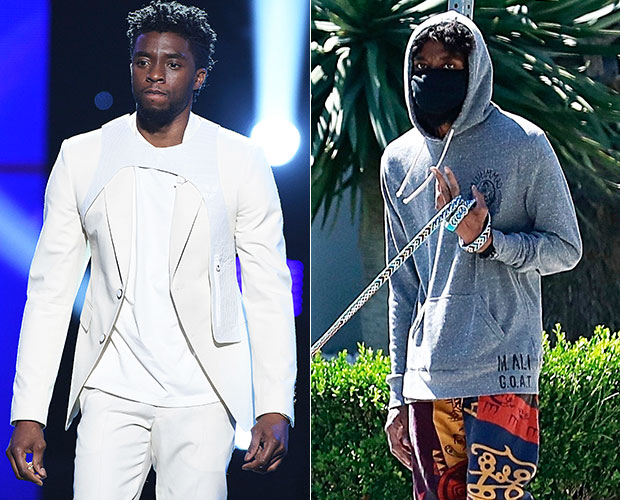 (L) Chadwick Boseman at an event in July 2018; (R) The actor walking his dog in his neighborhood, Los Feliz, CA on Friday, May 15, 2020. (Photo credit: REX/Shutterstock/BACKGRID)
Chadwick has not addressed the ongoing speculation about his weight. There was timid buzz about his smaller frame when he appeared at the American Music Awards in November 2019, but nothing came of it.
It’s unclear if the actor’s presumed weight loss is in preparation for a role. The only on-screen role he has in (pre) production is a TV sci-fi/fantasy series called The Black Child, which also stars Halle Berry and Common. Chadwick begins filming Black Panther II, in 2021, so he’ll definitely need to get chiseled for that. The Black Panther sequel is still set for release on May 6, 2022.