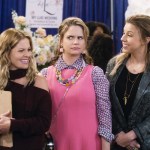 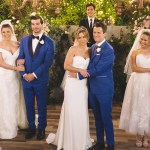 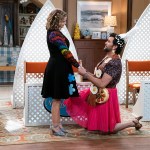 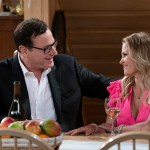 It’s time to say goodbye — again. The final episodes of ‘Fuller House’ will debut June 2 and this first look will make you feel all the feelings.

For over 30 years, the characters of Full House and Fuller House have been a part of our lives. They’re like family to us and always will be. After 5 seasons and 25 years after Full House ended, Fuller House is coming to an end as well. The final episodes are going to be a whirlwind, that’s for sure. Why? Because there’s a triple she-wolf wedding happening! Get ready for lots of laughs and lots of tears!

Stephanie’s getting married, DJ’s getting married, and Kimmy’s getting married. DJ will finally be saying “I do” to Steve, which will make OG Full House fans so incredibly happy. They’ve been endgame all along! It’s about time, am I right? Naturally, DJ is a little worried about everything. “Steve isn’t just marrying me. He’s marrying my entire family. I just want everything to go well,” DJ says in the final season trailer. As for Steve, he’s a “nervous wreck” about the upcoming nuptials.

This triple wedding will be bringing back familiar faces, including Danny, Joey, and Jesse. But don’t expect to see Aunt Becky or Michelle Tanner. Lori Loughlin was axed from the show after the college admissions scandal exploded. Mary-Kate and Ashley Olsen have not returned to the role of Michelle Tanner on Fuller House throughout its 5-season run.

DJ, Stephanie, and Kimmy riff about the show ending in the final moments of the trailer. “Why does it have to end? People like it so much,” Kimmy says. Stephanie replies, “I’m not ready for it to be done. I want to binge more.” Ramona cheekily asks what they’re talking about. “Ice cream,” the trio says. The farewell episodes of Fuller House will begin streaming on Netflix starting June 2.