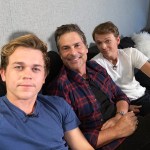 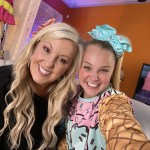 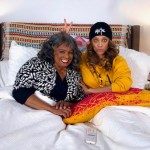 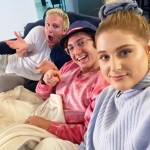 There’s a lot of TV content out there, and now there’s a show about celebs watching TV while quarantining with their families. Before the premiere of ‘Celebrity Watch Party,’ here’s what you need to know.

The ultimate quarantine reality series has arrived, so grab your family and the popcorn! The all-new unscripted series Celebrity Watch Party premieres May 7 on FOX. This TV show will take viewers into the homes of celebrities as they each react to the week’s most hilarious and exciting television shows. Celebrity Watch Party will also feature the families of celebrities as they watch alongside, too. The stars and their families will be sharing their insightful, hilarious, and emotional takes on what they just watched.

In the May 7 premiere episode, the celebrities appearing include Rob Lowe, Meghan Trainor, Joe Buck and Michelle Beisner-Buck, Raven-Symoné, Master P and Romeo, JoJo Siwa, Steve Wozniak, Curtis Stone, and Robert and Kym Herjavec. From kids to siblings to parents to friends, celebrities will be giving us a glimpse into the quality time they’re spending with their family and friends. Rob will be watching with his two sons, John Owen and Matthew, while JoJo’s got her mom, Jessalynn, by her side. Additional stars participating in the series will be announced at a later date.

People are watching TV more than ever before, and the possibilities are truly endless. There’s definitely something for everyone on TV. Everyone loves talking about their favorite television shows, and now your favorite stars will be revealing what they truly think on Celebrity Watch Party. What’s not to love?