Ammika Harris and Chris Brown continue to fuel dating rumors with their flirty banter on social media! This time, it was the model, 26, who dished compliments to the “Freaky Friday” singer, 30. During some fan exchanges on her Instagram account, she dubbed him the “G.O.A.T.” — also know as, “the greatest of all time.

“Tell Chris he’s the [goat]!!” a fan wrote under a photo Ammika shared on Wednesday, that featured a beautiful  sunset on a body of water. The commenter added a goat emoji, along with prayer hands and a black heart emoji. Ammika translated the emoji in her reply, writing, “GREATEST OF ALL TIME.” To emphasize her point even further, she added two red exclamation point emojis.

Ammika’s compliment to the father of her 6-month-old son, Aeko Catori Brown, came after Chris called her the “prettiest person on the planet. He shared the latter (written in all capital letters) under a sultry photo Ammika posted on April 26. She was pictured modeling a bra top with her fresh face and long, dark hair on display. 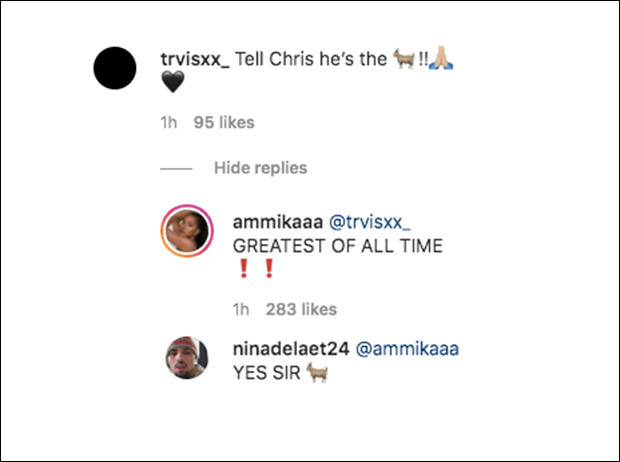 Chris is currently quarantining in his LA home, while Ammika and Aeko are still believed to be in Germany with her family. The mother-son duo have been there since mid-February, after an initial trip to visit her family seemingly overlapped with the COVID-19 pandemic. A source previously shared with HollywoodLife that Chris is in communication with Ammika and is on FaceTime with his son amid the global health crisis.

The singer is also dad to daughter Royalty, 5, who he shares with his ex, Nia Guzman. The two appear to co-parent very well together.