Jonathan Bennett thinks a Mean Girls sequel would be ‘so fetch.’ The handsome actor, who played everyone’s crush Aaron Samuels in the beloved 2004 teen comedy, told HollywoodLife EXCLUSIVELY why he was “extremely excited” when he heard Rachel McAdams’ recent Mean Girls reveal.

“I would love to do a sequel,” Jonathan told HL. “I was extremely excited when I heard Rachel say she’d love to play Regina George again because I’ve talked to over half the cast, including Lindsay [Lohan], and we all feel the same way. We’d love to bring these beloved characters back to life at some point, whether it be sequel or a TV series. I think the world would love to see these characters again. How cool would it be if the cast has grown up, and they are the parents to a new group of ‘Plastics’ entering high school.”

As Mean Girls fans know, the “Plastics” are an elite group of high school students led by Rachel’s character Regina George. Jonathan’s character, Aaron Samuels, is stuck in the middle of Regina George and Cady Heron, played to perfection by Lindsay Lohan.

The movie is so funny and relevant — thanks to the genius script by Tina Fey — that it’s hard to believe that the 16th anniversary of it’s release is this Thursday, April 30th. And, although the cast celebrates the movie every year on October 3rd, a.k.a. Mean Girls Day, Jonathan told HL that he plans to celebrate the anniversary this year too.

“I will be cooking my favorite recipe from The Burn Cookbook,” Jonathan told HL. “I’ll be making Fetch-uccine Alfredo. And for an appetizer I’ll be making Gretchen’s Wieners, which are pigs in a blanket. I released my book two years ago and it became a best seller, which I am really proud of. It’s an amazing parody cookbook for Mean Girls fans. It’s got recipes and games and quizzes. It’s a full activity book where you can get your friends together on Zoom, or on FaceTime, and you can watch the movie and relive some of your favorite moments, while you make the food from the The Burn Cookbook.”

Related: Lindsay Lohan’s Siblings: Everything to Know About Her Brothers & Sisters 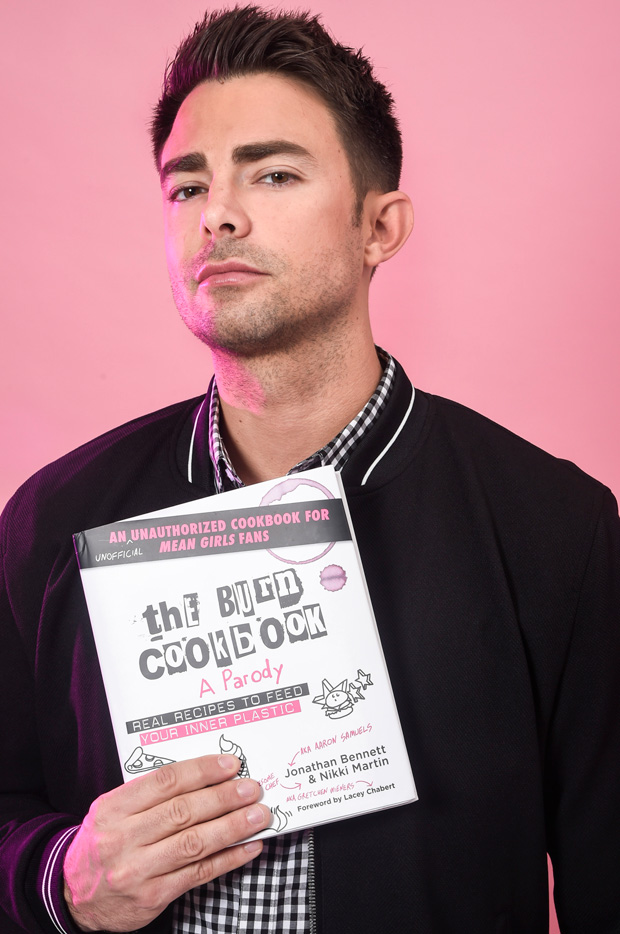 “There are also games in the book. There’s a game in there called ‘Which Plastic Are You’. It’s like those old Cosmopolitan quizzes. The book is great for quarantine because there’s so much to do in it, including a Mean Girls workout. You can put the movie in and do a workout, along with the movie. Every time they say ‘fetch’ you’re gonna have to do 20 jumping jacks. And it goes on and on. There’s also a drinking game in there, which is everyone’s favorite, it’s in our cocktail chapter, called ‘Happy Hour Is From 4-6’.”

Jonathan won’t just be cooking in honor of the anniversary, he’ll also be rocking his most ‘fetch’ tank top. “I’m so excited to team up with Tipsy Elves for another year of amazing fetch tank tops,” the versatile start told HL. “In my Jonathan Bennett Tipsy Elves tank top collection you can get everything from ‘On Wednesdays We Wear Rainbows’ to one that says ‘Gay For Aaron Samuels’. And 10% of all of the sales will go to The Trevor Project, to support them during pride.”