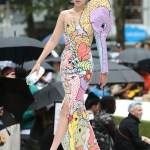 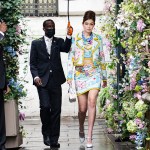 Bella Hadid, Anwar Hadid, Taylor Swift, Kendall Jenner and more family and friends made sure to spoil Gigi Hadid on her 25th birthday! Gigi was even filmed rocking a pretty tiara in front of her birthday cake.

Gigi Hadid is now a quarter of a century, but already has a century’s worth of gifts! The model didn’t need to celebrate her 25th birthday on April 23 with a lavish bash, because countless family members and friends went out of their way to send special gifts all the way to Yolanda Hadid’s rural farm in Pennsylvania, where the birthday girl is quarantining. Gigi received colorful flower bouquets from her “sweet daddio” Mohamed Hadid, “angels” Anwar Hadid and her little brother’s girlfriend, Dua Lipa (they’re quarantining in London), her “monkey love” Kendall Jenner, and her close gal pal Taylor Swift and the singer’s boyfriend, Joe Alwyn (oh, and their cats).

Gigi showed off all these flower surprises on her Instagram Story, while her sister Bella Hadid, 23, took to her own Instagram Story to share precious videos of her older sister! Gigi was filmed with a sparkly tiara sitting on her head as she closed her eyes, taking a contemplative moment to make birthday wishes in front of a scrumptious cake. A bouquet of pink, white, orange and red balloons floated behind the birthday princess!

Bella also revealed the many gift bags strewn across their family home’s floor, in addition to the birthday breakfast (mini pancakes, bacon) prepared for Gigi. Before the cozy celebration commenced, Bella paid a trip to Walmart’s flower aisle, which unfortunately looked a tad disheveled amid the nationwide pandemic. In another photo, Bella carried a generous amount of gift bags. “A very farmy b-day for a very special BDay girl,” the model wrote over the festive snapshot.

Now we’ll just have to wait and see if Gigi will post Zayn Malik’s gift! The singer has been quarantining with Gigi following their romantic reunion (the One Direction alum also owns a farm nearby Yolanda’s), and Gigi was actually looking forward to her “farmy” birthday with Zayn!

a rare jaylor mention… i wonder what they’re up to with mer and liv :) and benji ofc!!

“Gigi doesn’t mind celebrating her birthday at home on the farm at all” and “has no complaints,” a source EXCLUSIVELY told HollywoodLife ahead of Gigi’s big day. “She’s really not much of a party girl anyway, so a homebody birthday suits her just fine. When this is all over she’ll do something with her friends to celebrate turning 25, but for now, she’s perfectly happy to celebrate at home with her family and Zayn.”

“Gigi is not one of those high maintenance girls and she’s totally content spending her birthday at home on the farm with her family and Zayn,” a second source had EXCLUSIVELY told HollywoodLife. “She finds it very peaceful and has actually enjoyed getting some time away from her busy schedule for once in a long time. Gigi is so used to a fast paced life that it’s actually been a breath of fresh air being forced into this situation.”