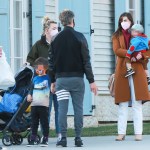 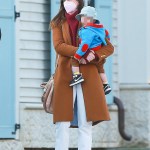 The latest celeb to take on the viral Internet ‘pillow challenge’ is Anne Hathaway — and she did it in the most iconic way! The challenge is simple: Wear nothing but a pillow and fasten it around yourself with a belt at the middle. Anne took things to the next level by belting one blue pillow around her midsection, then adding two white pillows to the side and back to form an ensemble that actually resembled a dress. She also stood in front of a massive butterfly painting to have a gorgeous backdrop that matched.

Anne took things to the next level, though, by adding a pair of sunglasses, as well as giant headphones to her look. It was totally reminiscent of one of the movie posters for her movie, The Princess Diaries, where she posed alongside Julie Andrews in a similar look. She also used a quote from The Princess Diaries in the photo’s caption, in case anyone missed the reference. “A queen is never late; everyone else is simply early,” she wrote, along with a crown emoji. Mia Thermopolis lives!

Anne starred in The Princess Diaries in 2001, and then the sequel in 2004. It was confirmed in Jan. 2019 that a third movie was in the works, and that a script had been written. However Anne told HollywoodLife EXCLUSIVELY in May 2019 that any decisions to move forward with the film were “in Disney’s hands.”

“A Queen is never late; everyone else is simply early.” 👑 #pillowchallenge

Meanwhile, the pillow challenge has been taking the Internet by storm over the last several weeks. Other celebrities to participate and share their photos online include Halle Berry, Tracee Ellis Ross and many more. Who will be next?!