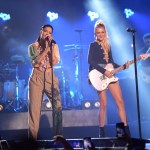 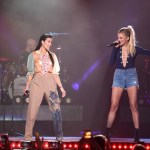 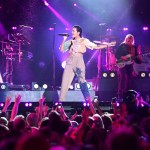 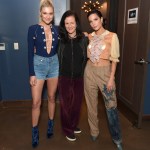 Kelsea Ballerini’s brand new album features a duet with her pal, Halsey, and the ladies teamed up to sing the track together while filming their episode of ‘CMT Crossroads.’

Halsey and Kelsea Ballerini’s episode of CMT Crossroads won’t premiere until March 25, but the network gave fans a fun sneak peek of what to expect with a new clip on March 20! In honor of the release of Kelsea’s new album, Kelsea, CMT shared the first live performance of one of the country singer’s hot new songs — which just so happens to feature Halsey. The ladies only performed the track during rehearsals for their CMT Crossroads special, so the footage is a true behind-the-scenes look at the big event.

For the performance, Kelsea showed off her long legs in a pair of tiny black shorts, paired with a plain white t-shirt, while Halsey bared her abs in a crop top and high-waisted jeans. The ladies commanded the stage together as they belted out the lyrics. “The Other Girl” has a bit of a Brandy/Monica “The Boy Is Mine” feel, as the singers tell a story of two women who are dating the same man. Each of them are left wondering which of them is actually in the relationship, and who is considered the “other” woman.

Kelsea and Halsey have been friends for quite a few years now, and have hung out together at award shows and in their free time. During the summer of 2018, the ladies went out for a wild night in Nashville together, and shared the experience with fans by posting videos of themselves singing karaoke at the bar.

Kelsea is Kelsea’s third studio album, which fans have anxiously been waiting for since she released Unapologetically in Nov. 2017. The album also features a duet with Kenny Chesney called “Half of My Hometown.” Fans can tune in to the full episode of Kelsea and Halsey’s CMT Crossroads when it airs on March 25 at 10:00 p.m. on CMT>