Game night! Gavin Rossdale and his 11-year-old son Zuma stocked up on sports goodies on Monday afternoon as self-quarantine guidelines continue to be mandated all over the globe due to coronavirus outbreak. The father-son duo were photographed leaving Big 5 Sporting Goods in Los Angeles, where they picked up a few items, including an orange frisbee and a black and yellow basketball.

Gavin, 54, was pictured holding a number of different items, one of which was made by Nike. He stayed true to his rocker roots and donned a bold cheetah jacket over his all-black ensemble. The singer also had a noticeably bulky left pocket that appeared to be filled with papers.

Meanwhile, Zuma was seen trailing his dad because he was busy working on his basketball skills. The pre-teen bounced his presumed new basketball while he was dressed in a head-to-toe Nike look — black and white shorts, a sweatshirt, socks and sneakers. Zuma wore glasses during the shopping trip. 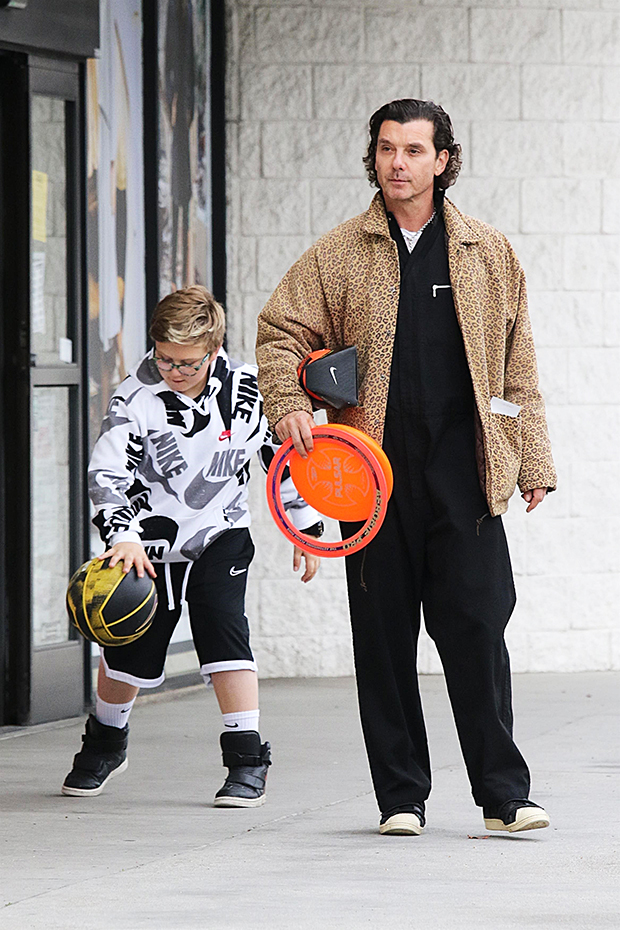 Zuma’s siblings, brothers Kingston, 13, and 6-year-old Apollo, along with their mom, Gavin’s ex-wife, Gwen Stefani was not present on the outing. Nonetheless, the exes did reunite in mid-February for Kingston’s football game — a rarity for Gwen and Gavin, who are known to be very private.

Gwen, 50, was joined by her boyfriend, Blake Shelton at her son’s game, along with son Apollo. It’s unclear what type of relationship she has with Gavin, however, they raised questions when they were seen sitting on opposite sides of the bleachers.

Related: Gavin Rossdale’s Kids: Everything To Know About His Daughter & 3 Sons

Gwen and Gavin were married for nearly 14 years when they decided to go their separate ways in August of 2015. The former No Doubt singer has since moved on with Blake, 43, who she first sparked romance rumors with on set of The Voice in 2014. Gavin has not moved on romantically since his split from Gwen.