ORIGINAL: The NBA season is the latest victim of the coronavirus, as the 2020 season has been suspended. It was announced shortly before the Utah Jazz were to face off against the Oklahoma City Thunder on March 11 that the game was cancelled due to “unforseen circumstances.” It turned out that Jazz star Rudy Gobert had tested positive for the coronavirus. Players from the Jazz and Thunder have been placed under quarantine, according to ESPN’s senior NBA insider Adrian Wojnarowski. “The NBA will use this hiatus to determine next steps for moving forward in regard to the coronavirus pandemic,” the league said in a statement.

Adrian reported that “I’ve been told that Rudy Gobert was never at the arena tonight, but he was in OKC. If he had been cleared of the virus, he was set to play.” Video of the 27-year-old purposely touching all of the reporters’ microphones prior to the Jazz’ March 9 game against the Toronto Raptors has gone viral. He did it during a news conference after the team’s shootaround at the Zions Bank Basketball Campus media room, rather than on the court as part of the Jazz’ COVID-19 response. The Jazz later went on to lose 101-92 to the reigning NBA champs.

The Jazz released a statement saying that one of their players “tested negative this morning for influenza, strep throat, and an upper respiratory infection.” They said that “his symptoms diminished throughout the day, but in cooperation with the NBA medical staff and Oklahoma health officials, the decision was made to test for COVID-19.” The team said a preliminary test came back positive just before tip-off and the decision was made to postpone the game. The league was notified as soon as it was determined that the player was going to be tested for the coronavirus. Just before the Jazz/Thunder tip-off, an announcement came over the PA system for spectators to leave “due to unforeseen circumstances” before commenting, “you are all safe,” fans to exit Chesapeake Energy Arena “in a orderly fashion.”

On Monday, he jokingly touched every microphone and recorder after media availability. 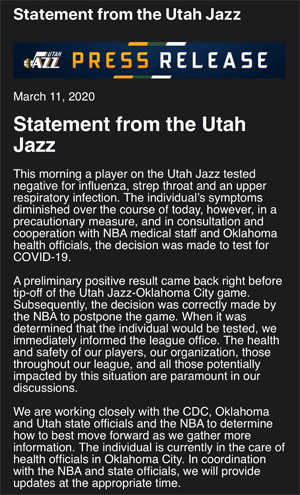 Earlier in the day the first impact of the coronavirus hit the Golden State Warriors, as announced they would no longer have fan attendance at their Chase Center games for the foreseeable future. The San Francisco Health Office announced an order banning gatherings with crowds of 1,000 people or more to stop the spread of the coronavirus. The team agreed to play without fans in the stands beginning with their Thurs. March 12 game against the Brooklyn Nets, but now it’s all a moot point as the entire NBA season has been suspended.