Hannah Ann Sluss was the picture of perfection as she met Peter Weber at the final rose ceremony on season 24 of The Bachelor. With Madison Prewett leaving the show to go home before the rose ceremony, Hannah Ann was the only woman to greet Peter on the final day of filming in Australia. She looked absolutely stunning, wearing a white gown that complemented her figure to perfection. The dress had a low-dipped neckline, and a slit up the side, so Hannah Ann had some leg on display.

After reiterating how strong her feelings are for Peter, Hannah Ann got to hear Peter really open up about how much he loves her for the first time. By the end of their conversation, he was down on one knee, proposing to the 23-year-old. Hannah Ann happily accepted, and she added a massive diamond ring as an accessory to her gorgeous finale ensemble. The couple seemed blissfully happy after the engagement, and could not stop hugging and kissing one another as they excitedly celebrated the big day.

Getting to the final rose ceremony did not come without a lot of drama, though. Things were very up in the air in Peter’s relationship with Madison during the last two weeks of filming, after she found out that he had been intimate with the other women in the fantasy suite. Hannah Ann stood by Peter as he figured out his feelings, but grew frustrated when he told her that his heart was with BOTH her and Madison on their last date — even though, unbeknownst to Hannah Ann, Madison had already left the show. Hannah Ann almost didn’t show up to the final rose ceremony at all, but came at the last minute. 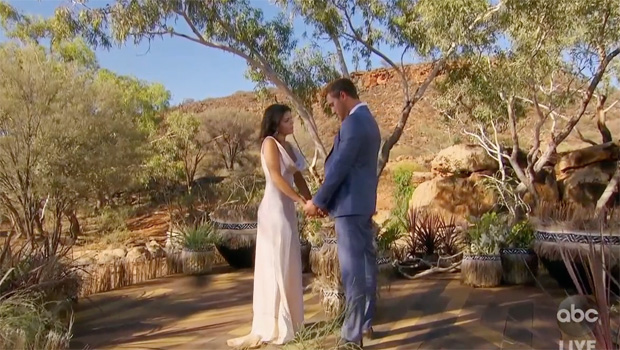 All season long, it’s been teased that Peter’s ending will be unlike anything we’ve ever seen before, so there’s clearly still a lot that needs to play out as the finale winds down. At least Peter and Hannah Ann had this blissful moment while it lasted!