Katy Perry has that pregnancy glow! The 35-year-old American Idol judge stepped out on stage for the very first time since announcing she has a baby on the way, on March 4 — and she looked incredible! Katy performed her fan-favorite hits “Roar” and “Firework” at the ICC Women’s T20 Cricket World Cup Final in Melbourne, Australia and had a costume change for each song because of course she does! Katy first appeared in a 60s-style pink, long-sleeved dress emblazoned with neon Venus symbols, which represents the female gender. The sleeves flared so dramatically they looked like a cape that trailed behind her in the breeze as she walked across the stage at the outdoor event. The dress featured a high neck, and showed off her growing baby bump, as well as her legs. She paired the mini dress with knee-high pastel pink vinyl boots. Her retro vibe even extended to her platinum blonde hair, which she styled in a half up/half down look with flicked ends.
Time for a costume change! Katy’s second outfit showcased her bump even more, in a skin-tight purple mini-dress. The sleeveless frock, also emblazoned with Venus symbols in glittering pink sequins, looked incredible on the “I Kissed A Girl” hitmaker. She drove her point home with Venus symbol earrings encrusted with rhinestones, again in a pastel pink shade, and sang into a bedazzled metallic microphone. Her soft blush and purple eyeshadow also matched her pastel outfits! Throughout the performance at the women’s sporting event, it was clear Katy’s pregnancy isn’t slowing her down. She danced alongside performers dressed as giant, glittering female cricket bats, as well as young women carrying ‘girl power’ signs. We love it!

Her high-energy performance came just four days after she confirmed that her and fiance Orlando Bloom, 43, are expecting their first child together. The beauty debuted her bump at the end of the music video for her new song “Never Worn White” and confirmed that she’ll be giving birth this summer during an Instagram livestream with her fans right after. “I’m excited, we’re excited and we’re happy — and it’s probably the longest secret I’ve ever had to keep,” she said about her pregnancy during the stream. “I knew I would tell you in the best way, which is through a piece of music because that’s how I speak to you.” 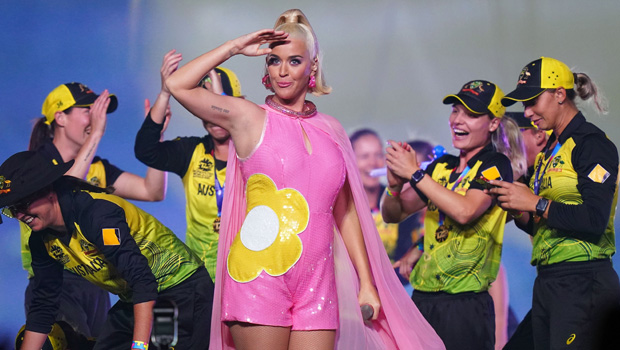 During the livestream, she added, “There’s a lot going on this summer — I’m going to be giving birth, literally.” She also panned the camera down to show off her massive baby bump and squealed with delight and revealed some of her cravings, including Tabasco sauce! This marks the first child for Katy, and the second for Orlando, who is also a father to 9-year-old Flynn with ex-wife Miranda Kerr. We look forward to seeing more pics of Katy showing off her cute bump — now that her secret’s out, she’s glowing more than ever!