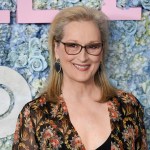 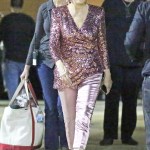 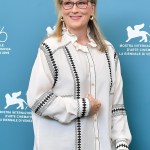 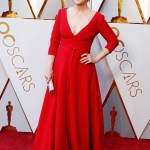 Meryl Streep and Nicole Kidman are going to the prom — sort of! The Oscar winning actresses showed off their characters’ shimmering costumes on the set of Ryan Murphy‘s The Prom, based on the seven-time Tony-nominated Broadway musical. On March 5, the two Big Little Lies actresses were seen on the Los Angeles set in effervescent costumes of sparkling sequins and fluffy cuffs! Nicole, 52, sported a bright green dress that shimmered and played up her blonde hair perfectly. The sleeves of her dress featured cuffs and a hem above her knees with the same embellishment in her frock as Angie Schworer. Meryl, 70, wore a pink ensemble featuring pants and a sequined top with a V-neckline. She sported a ginger, pixie-cut wig and chandelier earrings as she got into character as Dee Dee Allen!

Meryl, Nicole, and more will bring to the screen the musical that was nominated for Best Musical at the 2019 Tony Awards. The film appears to follow the musical’s narrative to the letter. A troupe of theater stars descend upon a small, conservative Indiana town to support a high school girl who simply wants to take her girlfriend to the prom. The musical, upon it’s debut, was a hit on Broadway. Along with Best Musical, the show earned Tony nominations for Best Leading Actor in a Musical (Brooks Ashmanskas), Best Actress in a Musical (Beth Leavel and Caitlin Kinnunen), and Best Direction of a Musical (Casey Nicholaw).

The production’s original star, Tony winner Beth Leavel, has only had praise for the show. “It’s really special,” Beth shared EXCLUSIVELY with HollywoodLife in June 2019. “There’s moments that I can actually hear when an audience is listening so hard — no one’s coughing, no one’s clearing their throat, no candy wrappers, no nothing, you could hear a pin drop. They’re so involved in the resolution of all of us in the last fifteen minutes of the show and at the end of Act 1 –Like, what’s happening? I didn’t know it was gonna go here…It’s real personal to us.”

The film adaptation’s director, Ryan Murphy, already has a lot on his creative plate — better yet, platter. The creative has already unveiled the returning and new cast members of the 10th season for FX’s American Horror Story and continues to serve in producing roles for American Crime Story, Netflix’s upcoming Hollywood, and FX’s Pose. The Prom also stars Kerry Washington, Keegan-Michael Key, James Corden, Andrew Rannells and more! Netflix has yet to release an official date for The Prom‘s release, but it is slated to hit the streaming service in 2020!