So, who was Joe Jonas and Sophie Turner shopping for on Monday when they hit up a baby store in Studio City? The singer, 30, and actress, 24, were photographed looking through a rack of what appeared to be kids’ costumes.

The specific area the couple was shopping in what looked like it male items. Elsewhere in the photo there were colorful pinatas and boardgames at the store. However, it’s unclear where exactly the shopping took place.

Sophie wore a white baggy New York Giants sweatshirt that concealed what could have been any sign of a baby bump. She coordinated the red and blue striped top with a pair of matching sweatpants and white sneakers. Meanwhile, Joe sported an all black look with white sneakers and a printed tee. 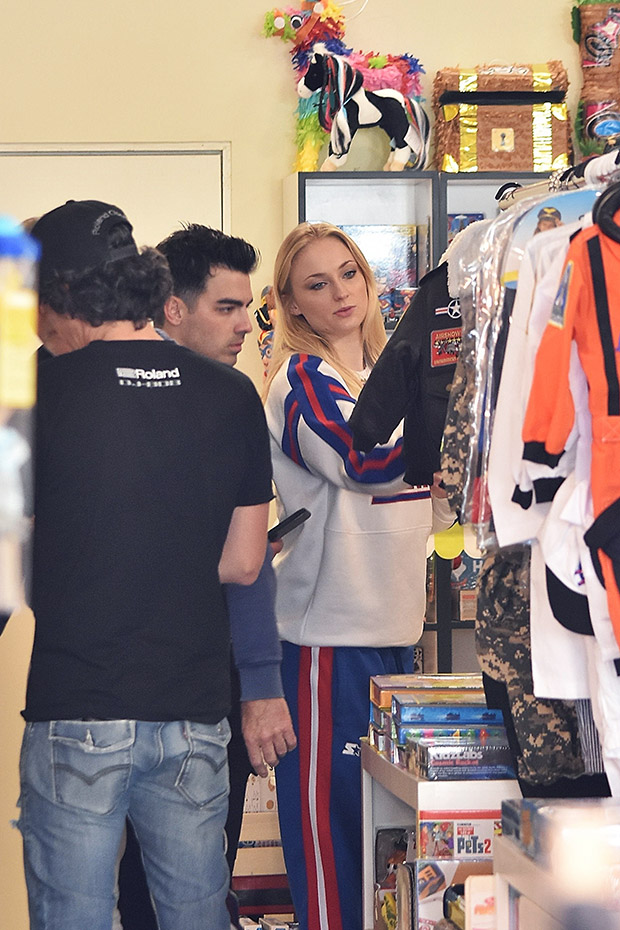 It’s been about a month since it was first reported that Sophie and Joe are expecting their first child together. HollywoodLife reached out to reps for both Joe and Sophie at the time. The couple has not addressed or confirmed the pregnancy reports. And, Sophie hasn’t shied away from the paparazzi, but she’s only been captured in baggy clothes since the initial pregnancy report.

Sophie and Joe said “I do” on May 1, 2019, in Las Vegas. The ceremony, which was officiated by an Elvis impersonator at A Little White Wedding Chapel, occurred right after the Billboard  Music Awards. About two months later, they wed for the second time in a formal ceremony in the South of France. Here’s to hoping we’ll get a baby Jonas very soon!