Amber Rose and her boyfriend Alexander Edwards (aka, A.E.) were photographed together in LA on Monday night. The model, 36, and the vice president of artistic development at Def Jam Records, 35, showed off some PDA while out on a date night at Matsuhisa. They were all smiles as they held hands in a new paparazzi pic, which showed off their near-matching outfits.

Both Amber and A.E. were dressed casually in black and white sweats and hoodies. Slash Electric‘s parents rocked sneakers and sported their individual face tattoos. Amber donned black shades, while A.E. exposed his eyes and his signature green hair. They were joined by two male friends, as seen in the new photo.

Amber’s been in the news lately after she got both her sons names tattooed in cursive on her forehead. She first debuted the new ink — “Bash” and “Slash” — on February 7 in a YouTube video shared by Cool Kicks. She, along with A.E., were guests on the brand’s channel, which takes celebs and athletes sneaker shopping. Amber shares 7-year-old son Sebastian Taylor Thomaz (aka, “Bash”) with ex-husband Wiz Khalifa. 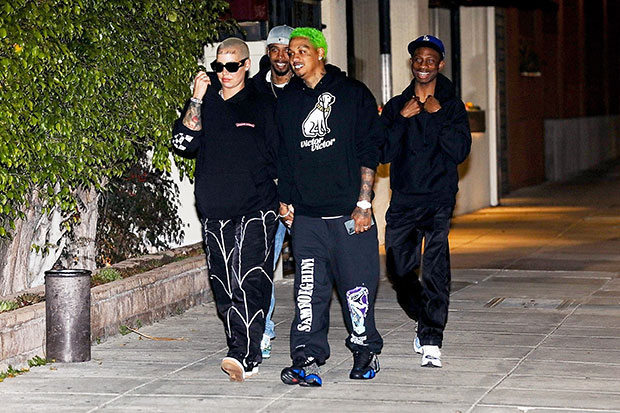 Following the debut of her new ink, Amber was subject to negative reviews from critics online. She later addressed backlash in a post on Instagram.

“For the people that are telling me I’m too pretty for a face tat are the same people that would tell me that I’m ‘too pretty’ even if They thought I was ugly and lie to me Lol,” she wrote on February 12.  “Or they would just tell me I’m ugly,” she continued, adding a crying-laughing emoji. “So either way The moral of the story is do whatever the f**k you want in life — Muva.”

Amber later admitted that she was inspired to get the tattoo, which she had been wanted for a long time, by Kobe Bryant‘s untimely death and her father’s battle with cancer.

Amber and A.E., who were introduced through a mutual friend in 2015, began dating in 2018. They went public with their relationship while attending her 4th Annual SlutWalk in LA.