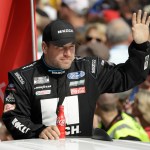 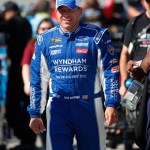 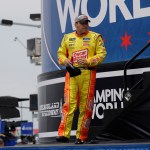 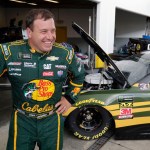 Ryan Newman’s car flipped into the air several times before exploding into flames in this horrifying video and his condition remains unclear.

UPDATE (2/18/20 @ 4:08 p.m. ET): Ryan is awake and speaking to doctors and his family. “Ryan Newman remains under the care of doctors at Halifax Medical Center in Daytona Beach, Florida. He is awake and speaking with family and doctors,” Roush Fenway Racing shared with TMZ. “Ryan and his family have expressed their appreciation for the concern and heartfelt messages from across the country.” The team reiterated that Ryan’s family members “are grateful for the unwavering support of the NASCAR community and beyond.”

UPDATE (2/17/20 @ 10:32 p.m. ET): NASCAR and Roush Fenway Racing have released a joint statement about Ryan’s condition. “Ryan Newman is being treated at Halifax Medical Center. He is in serious condition, but doctors have indicated his injuries are not life threatening. We appreciate your thoughts and prayers and ask that you respect the privacy of Ryan and his family during this time. We appreciate your patience and cooperation and we will provide more information as it becomes available,” the statement read.

Ryan Newman, 42, has been rushed to hospital. The NASCAR driver was involved in an extremely scary crash while driving his final lap of the Daytona 500 on Monday, Feb. 17 in Florida and footage from the accident is shocking. Ryan’s car veers to the left of the track — cutting off other racers — as it collides with the barrier and flips. The car then bounces off another vehicle as it rotates in the air and explodes into flames. The other vehicles — including Ryan Blaney‘s, which nudged Ryan’s car — race by as Ryan’s continues to skid on the track upside down. Ryan’s car then slid right past the finish line.

In slow motion, parts of the vehicle break right off on impact and fly into the air. The car was severely dented as it was then hit again by another racer, showing other parts also detaching from the main body of the vehicle. “On the inside, they lock bumpers and it turns Ryan Newman around — upside down he goes,” a FOX Sports broadcaster narrated over the video clip. “Ryan Newman goes around, the car goes to its roof and then here’s Corey LaJoie,” another host added, referencing one of the other racers.

Ryan was immediately rushed to hospital, and emergency personnel — along with an ambulance — could be seen on-site. The South Bend, Indiana native’s condition currently remains unclear, reports TMZ, and no other racers appear to be suffering injuries from the crash. It’s also being reported that the race was delayed due to poor weather.

The NASCAR star was leading on his final lap when the crash happened. Denny Hamlin ultimately took the first-place prize — making this his third win overall and second in a row — and Ryan was credited with coming in fourth.

The horrifying accident comes just four days after Ryan announced he was separating from his wife of 16 years Krissie Newman, 42. “After 16 years of marriage, Krissie and I have decided to amicably separate. We will continue to jointly raise our girls, while remaining friends and continuing to work together supporting Rescue Ranch. Thank you for the years of support and friendship. We ask that our daughters’ privacy be respected at this time,” he shared on Twitter on Thursday, Feb. 13. The couple are parents to daughters Brooklyn Sage and Ashlyn Olivia.