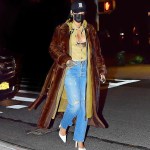 Rihanna is ‘back’ to making music. The Grammy-winning artist delighted fans after sharing a photo from the recording studio on Feb. 13. Apparently, she was with a fellow big artist!

You’ve kept asking, and Rihanna has been listening. Amid constant questioning on where her ninth studio album is, the 31-year-old singer had a big announcement on her Instagram Story on Feb. 13: “gang. back in the STU.” Of course, STU is short for studio, which is exactly where RiRi shared her happy news from! Her Instagram Story post showed a photo of a sound engineer station, which displayed a strip of digital green text that read, “The Neptunes.” That just so happens to be the music production duo name for Pharrell Williams and Chad Hugo!

It looks like Rihanna’s getting her Valentine’s Day started early! The singer and retail tycoon had already revealed she’d be in the studio on the most romantic day of the year, after her reported split from Hassan Jameel. “I’m going to be in the studio. I’m so excited actually. I can’t say who I’m working with, but it’s somebody I’ve been wanting to work with him for a long time,” she told The Cut, revealing her plans for Feb. 14. Alas, she couldn’t keep the secret: “Okay, I’ll tell you. [It’s] Pharrell.”

Rihanna has close ties with Pharrell. Not only did he perform at her Diamond Ball in Sept. 2019, but she also collaborated with his hip hop band, N.E.R.D., for the 2017 hit “Lemon.”

Rihanna has been dropping teasers about her forthcoming here and there for months! In Aug. 2019, fans noticed that Rihanna registered a song called “Private Loving” with her music publisher, BMI. In December of that year, Rihanna really got fans sweating after posting a clip of a dog dancing with the caption, “update: me listening to R9 by myself and refusing to release it.”

update: me listening to R9 by myself and refusing to release it

As for when fans will finally be blessed with this album, which they have been waiting for ever since Rihanna’s Anti record dropped in 2016, they’ll have to be patient! “She’s just, like, on her own terms. I don’t think it’s really about the songs. It’s a timing thing,” The Dream, a producer who’s working with Rihanna on her new album, EXCLUSIVELY told HollywoodLife at City Of Hope’s 15th Annual Songs of Hope ceremony in Sept. 2019.